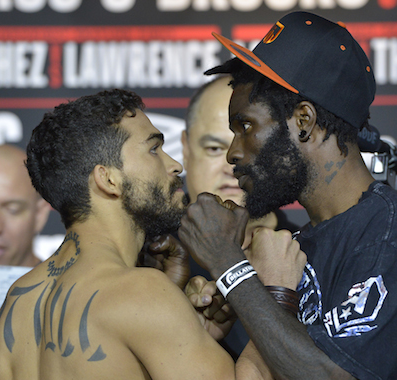 Bellator 145 takes place this evening from Scottrade Center in St. Louis, Mo. The main event features a Featherweight Title match as Patricio “Pitbull” Freire puts his belt on the line against Daniel Straus in a trilogy fight. In the co-headliner, Lightweight champ Will Brooks defends his title against Marcin Held.

PMN will provide round-by-round updates and video highlights of all the action coinciding with the live broadcast at 8 p.m. ET/5 p.m. PT.

Round 1 – All stand-up. Lawrence takes the round with crisp combos and footwork.

Round 2 – Sanchez is bleeding over his right eye. Lawrence has been in complete control but eats a head kick in the last minute of the round that drops him. He recovers quickly though and ends the round on his feet.

Round 3 – Lawrence scores a takedown holds Sanchez down for a couple minutes. Sanchez scrambles, looks for a leg, and it’s back up with 30 seconds left. Sanchez with a Thai plum and knee. He looks for the takedown as the bell sounds.

Round 1 – Kurt Angle on guest commentary. Thompson connects first with punches and connects enough that Lashley shoots in and gets the takedown. Bobby landing some big hammerfists as Thompson turtles up. Lashley lands some bombs and Thompson is done. Clearly Lashley has gotten better since they fought three years ago. Apparently Thompson knee was injured on the takedown.

Bobby said he heard Thompson’s knee pop during the takedown.

Round 1 – Chandler connects with punches and forces the shot from Rickels, but Rickels gets put on his back and Chandler takes top control inside full guard. Chandler stays busy with the ground and pound but Rickels is able to finally get up with a little over 2 minutes to go. Right hand from Chandler. Rickels occasionally landing leg kicks and a few punches but gets taken down. Chandler briefly looks for the neck. 10-9 Chandler as I see it.

Round 2 – Takedown from Chandler but Rickels is up and starts connecting with punches. Chandler hurts Rickels with punches and jumps on a guillotine but Rickels gets free, they scramble, and Chandler looks for the choke. Rickels is busted up badly. Chandler raining down shots to Rickels’ busted up face against the cage. The ref has seen enough of the blood-letting and saves Rickels from extra brain trauma. Great heart from Rickels.

Will Brooks (c) vs. Marcin Held – for lightweight title

Round 1 – Marcin Held with a takedown about 50 seconds in. I just found out “Felony” Charles Bennett (formerly Krazy Horse) will be doing a column for us once a week. I thought I’d mention that while Held holds Brooks down. Held is holding. He likes to hold, that Held guy. Remember that Beatles song, I Wanna Hold Your Hand. What if Held sang that while holding Brooks down? That would be much more entertaining than what I’m watching. …. Brooks gets a reversal. Held goes for a leg, and now a toe hold, then to kneebar, straightens it out but Brooks gets free of the submission. Brooks with a couple elbows from top before the bell.

Round 2 – Brooks with a bodylock takedown, lands in side mount. Marcin gets full guard then looks for a triangle, then to omoplata, now a leg. This guy is so dangerous. He has Brooks’ leg straightened out again for a second before Brooks gets free and takes to full mount. Body shots, looking for an arm triangle. Brooks trying to get to side mount to complete the choke. He gets to side, but then hops in full mount. Under a minute to go. Brooks controlling, then starts dropping some elbows and punches. Held gives up his back before the bell. Clear round for Brooks.

Round 3 – Held shoots in but gets put on his back. Brooks stays heavy on top softening Held up with punches to the body and head. This goes on for some time. Now under 2 minutes to go. Held goes for a leg and causes a brief scramble, but Brooks is right back on top dropping them shots. Held looks for a leg, but gets hit with elbows, he switches to a footlock attempt. Held is cut open. 10-9 Brooks.

Round 4 – Held with a leg kick, then immediately rolls for that leg, looking for a kneebar, then an inverted heel hook, but Brooks escapes once again and is back in top control. This fight has had flashes of excitement but… it’s a slow pace. … There’s another major announcement to come before the main event. … I expect it to be Fedor vs… I have no idea. Randy Couture? … Held goes for the leg again. Brooks gets free and unloads more punishment before the bell. Held slow to get up.

Round 5 – Brooks with another takedown and almost as soon as they hit the canvas, it’s like it squished a fart of “boos” out from under the cage. … We tick down to about 2 minutes and Big John has seen enough, stand it up fellas. But it takes about a split second for Brooks to take us back to boredville. Look, it’s effective, there’s no denying that. It’s still boring as shit drying on the sidewalk. Finally, it’s over. Give him his belt and be done with it.

Brooks’s knee got jacked in round one during a kneebar attempt from Held. Big John heard it popping and Brooks felt it buckle when he stood back up. That was the reason for all the takedowns. Now I feel like a real dick. That’s really impressive actually. Unfortunately for the fans and viewers at home, we had no idea what was going on.

Round 1 – Pitbull stuffs a takedown attempt from Straus, but Daniel stays on him. Pitbull lands some shots to break free. Straus working the jab. Fairly cautious round other than the grappling. Inside leg kick from Straus, straight into a takedown. Pitbull gets up to eat a couple punches. Clinch, knee to the body from Straus. Knee from the clinch from Straus. Pretty close round.

Round 2 – Low kick from Straus. Another. Then goes high, skims the head of Pitbull. Clinch and knee dance. Clinch and knee from Pitbull to the body. Low kick, a right jab, then a straight left drops Pitbull straight back. Straus goes in and Pitbull goes for an armbar, Straus gets free and unloads punches. Pitbull looks out of it, but begins to threaten with a kimura. Lets it go and Straus lands more punches. Pitbull is able to work his way to his feet and survives to the end of the round. Clear round for Straus.

Round 3 – Straus scores with punches early. Eats a big left hook. He’s not himself. He’s biding his time. Straus shoots in, slips, and Pitbull avoids it. Body jab from Straus. Left hook again from Straus, backing Pitbull up. Left and a right from Pitbull. Pitbull buckles Straus’ leg with a low kick. Straus with his own low kick. He shoots, stuffed. Pitbull takes an eye poke and a brief timeout is called. Remaining seconds were uneventful.

Round 4 – Chandler stuffs a takedown attempt. Pitbull scores with a punch combination, his best yet. He lands a right. Now they’re slugging. Both scoring. He backs Straus to the cage with a nice combination. He goes for a takedown before the bell but doesn’t get it.

Round 5 – Straus landing jabs. Pitbull shoots in. Straus stuffs it and holds him against the cage. High kick from Pitbull after they break. Pitbull with a takedown. Straus gives up his back and Pitbull gets a hook in. 2 minutes to go. Pitbull softens him up with punches, but Straus gets to his feet with 1:19 to go. Pitbull presses him to the cage, backs up with punches, lands a couple left hooks. Straus firing back now. Pitbull connecting. Straus winging shots, lands an uppercut. Pitbull getting the better of it and they slug it out until the bell. Pitbull got that round but lost the fight as I see it.