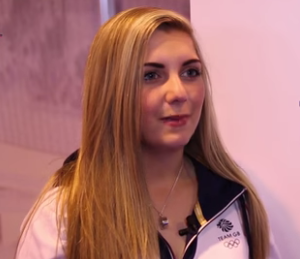 The world of skeet shooting is not one familiar to many, but Britain is lucky enough to have a bright emerging talent in the field. At only 17 years of age, Amber Hill has represented the country at her sport since 2010, and is available for booking through MN2S Talent Agency in London.

Skeet shooting is a division of clay pigeon shooting, which involves shooting clay targets with a shotgun as they are shot up in different directions from machines on the ground. Olympic skeet shooting has been in existence since 1968, and has been open to both sexes since 1992. The shooter must stand with the gun resting at no higher than mid torso level and is required to shoot the clay target after it has been fired, which can be between 0 – 3 seconds after the target is called for by the shooter.

Amber Hill first competed for her country as part of the England Ladies team aged 12 in 2010, and has since then made a significant impact on the scene, winning the BBC Young Sports Personality of the Year in 2013. In 2012, Hill equalled the Ladies World Record at only 15 years old, and garnered many successful results in 2013, including gold at the ISSF World Cup in Mexico, which made her the youngest ever recipient of a women’s senior gold medal.

The highlight of Hill’s career so far was a sterling performance in the first ever European Games in Baku, where she progressed strongly through to the final and won a gripping sudden-death shoot out, cementing her place in the team for the 2016 Olympic Games in Rio de Janeiro.

Hill is a breath of fresh air in a very traditional sport, a young face that brings vitality and originality to the sport, and for this she has been recognised, being in popular demand for broadcasting appearances. She has appeared on the BBC, Sky Sports and also Sky 1’s award winning show, A League Of Their Own Christmas Special.

Amber Hill has coped impressively with the weight of expectation and popularity with the public at such a young age. Currently training to be a beautician, she displays an admirable maturity as she performs well in her chosen sporting field, and is very able to convey her inspirational journey and achievements as an after dinner speaker. To find out more about booking Amber Hill, please contact a talent agent at MN2S Agency in London.