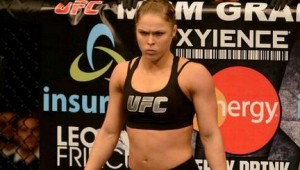 women’s bantamweight champion Ronda Rousey and her coach Edmond Tarverdyan spoke with media today during a media session at the Glendale Fighting Club where Rousey trains. The biggest topic of the day was Rousey and her coach refusing to talk about the negative comments her mom AnnMaria De Mars said regarding her coach a couple of weeks ago.

You can find that interview here.

Rousey and her coach decided to take the high road when questioned about her mom’s public lashing of Tarverdyan. When asked if she had spoke to her mom about the comments she made, Rousey said, “I really don’t think that’s anybody’s business.”

Tarverdyan remained completely respectful in his response regarding the comments Ronda’s mom made about him:

“It doesn’t matter for me,” Tarverdyan said. “We have a fight in front of us Nov. 14. That’s all I worry about and I care about at this point. It’s her mom at the end of the day, and that’s it.

“I’m a person that’s never spoke negative about anybody’s mom and will never do that. Friendship, anybody. I’ve always said a mom is a mom and that’s it. That’s all I have to say.”

Rousey is Tarverdyan’s highest profile fighter, so it would make sense that he remain respectful even though Rousey’s mom came at him pretty hard in her interview.