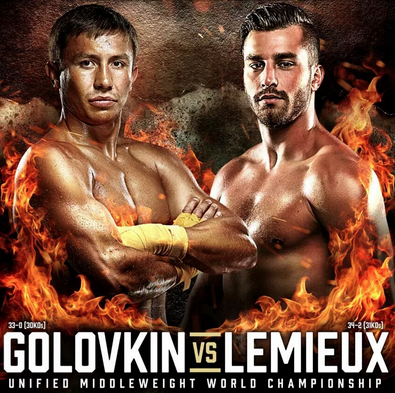 Join us here at PMN for live round-by-round updates of the main event!

GENNADY GOLOVKIN (WBA) VS. DAVID LEMIEUX (IBF) ROUND BY ROUND UPDATES:

Round 2 – GGG with a couple nice rights to start. Lemieux scores inside. GGG back with the jabs. Very quick accurate jabs from GGG at a moving target nonetheless. More snappy jabs snapping Lemieux’s head back almost every time it lands. Left hook counter from GGG almost caught him solid. Lemieux with power shots but GGG avoids them just out of range. Body shot and then a right from GGG. Jab, jab, jab, then a hard right from GGG. Lemieux complains to ref he was hit behind the head. 10-9 GGG.

Round 3 – GGG back with the jab game. Body shot, jab jab right. Left hook from GGG catches Lemieux dipping. Left hook to the body then an uppercut from GGG, pop pop pop. More jabs from GGG, and they trade left hooks before the bell. 10-9 GGG.

Round 4 – Lemieux scores with a jab combo early. He’s getting inside more now, landing more jabs. Nice left hook to the body from Lemieux. GGG still throwing that jab. But Lemieux knows he has to hustle now. Left hook from Lemieux, but eats a jab. Strong left hook from GGG, Lemieux is hurt and GG attacks, Lemieux wobbles and GGG smells the hurt and is scoring. Lemieux is wobbly but dancing, avoiding. GGG remaining patient with 20 seconds to go. Lemieux winging shots, eats an uppercut before the bell. 10-9 Golovkin.

Round 5 – GGG lands some good shots but Lemieux scores big with a combo. GGG pays him back with a jab and right cross and snaps Lemieux’s head back. Effective jab from GGG. Again. Again, followed by a right and a left to the body that puts Lemieux down. GGG hits him once while he’s down. He gets a count but gets up. GGG is all over him in the final seconds. Wow. It was a left hook to the liver that put Lemieux down. 10-8 GGG.

Round 7 – GGG comes out popping that jab. Right from Lemieux. GGG snaps the head back with more left hands. Lemieux’s face looking rough. Ref calls the doctor to check him out. He’s good to go, he had blood coming from his nose. … Lemieux getting inside, throwing heat. GGG ‘s jab though is a constant reminder of who’s in front of him. Right hand and left hook from Lemieux. Hard overhand right from GGG, another right … jab, body shot. Left hook and a right from Lemieux. Hard body shot from GGG. Uppercut from GGG. 10-9 GGG.

Round 8 – Lemieux already bleeding after a few jabs. More jabs touch Lemieux up. GGG touching him up landing practically at will, to the body, to the head, from all angles and the ref has seen enough after one last liver shot. GGG takes it.