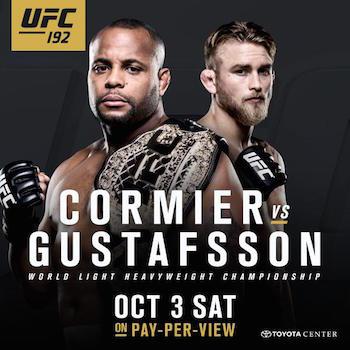 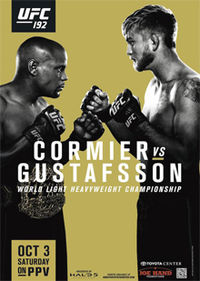 The UFC heads back to Houston, Texas Saturday for UFC 192. The event will feature the light heavyweight division and will go a long way in establishing a pecking order for the 205-pound division heading into 2016. The champ Daniel Cormier will face off against the only man to really push Jon Jones, Alexander Gustafsson. Ryan Bader will face Rashad Evans also on the card with the winner likely receiving a title shot next year.

Let’s get to the picks.

If Miesha Tate isn’t the gatekeeper in the UFC women’s bantamweight division it’s probably Jessica Eye. Eye is 1-2-1 in the UFC, but did have a big win over Sarah Kaufman even though a failed drug test resulted in the fight being ruled a no contest. In her last bout Eye lost a close decision to Tate in Chicago in July. Now “Evil” will square off against up and coming TUF winner Julianna Pena who is looking for her third straight win

This bout is the classic “striker vs grappler”. Pena has won both of her UFC fights by first round knockout while Eye usually likes to work her wrestling and squeak out a decision. We believe that Pena is more explosive and is fairly well rounded, even though she hasn’t had time to show it in her fights. Pena wins by TKO Rd 1

Ruslan Magomedov has quietly worked himself into position to jump into the UFC rankings in Houston with a win over Jordan. The Russian has won his first two in the UFC and has a win over Tim Sylvia on his resume. But standing in Magomedov’s way is Shawn Jordan. Jordan is red hot with three straight wins in the octagon. “Savage” is fun to watch and is one of those guys who goes out there and gets the highlight reel knockout or goes down in a blaze of glory.

This fight is tough to call but Jordan gets the edge by way of his training camp, American Top Team. The former LSU football player will get his fourth straight win in Houston.

Ryan Bader was thought to be the top contender for Daniel Cormier’s title after he defeated Phil Davis in January. “Darth” and Cormier exchanged words after “DC” at the UFC 187 postfight press conference in May leading many to believe Bader vs Cormier was coming up in late 2016. Dana White pulled the rug out from under Bader and gave the title fight to Alexander Gustafsson who was coming off a loss. If Bader could come up with a win over former champ Rashad Evans at UFC 193 it would be hard to deny him once again.

In 2010 Rashad Evans was always hanging around the top of the light heavyweight division but a loss to his rival Jon Jones and an upset defeat at the hands of “Little Nog” bumped him to the back of the line. In 2013 “Suga” defeated Dan Henderson and Chael Sonnen to get back in the mix but injuries have kept the former champ on the sidelines for two years. Can Evans return to form and earn himself a shot at the belt with a win over Bader?

The answer is no. At 36 years of age Evans is in the twilight of his career. Bader can match him on wrestling and has knockout power in his hands. It may not be a pretty fight but Bader wins a decision.

Hendricks vs Woodley is a grudge match from their Big 12 wrestling days. Woodley accused Hendricks of fish hooking in a wrestling match but Hendricks says that he was bit by the former Missouri Tiger. Woodley was deducted a point for the foul in question that gave the match to the Oklahoma State powerhouse.

This fight will be interesting to watch. Both guys have wrestling and the fight could come down to who can land the big right hand. Woodley has KO wins over Josh Koscheck and Dong Hyun Kim while “Big Rig” has knocked out Martin Kampmann and Jon Fitch. Hendricks seems to fight safe these days and we will go with him to take a decision in Texas.

Now for the main event. Since winning the belt Daniel Cormier has kind of gone heel. He’s cutting promos on people and has become a polarizing figure. If he wants to go out after the fight he may have a hard time finding someone on Single Houston to party with. The one thing Cormier does have going for himself is wrestling. No one in the division can match him on the ground.

At UFC 163 in 2013 Gustafsson showed the world what he could. That night in Canada the Swedish knockout artist beat up Jon Jones and sent him to the hospital. Unfortunately for him the judges awarded the fight to the champ despite many fans around the world who felt “The Mauler” was robbed.

This fight will come down to DC’s wrestling. Cormier will likely be able to take Gustafsson down at will and eventually grind him out. “Gus” will have a puncher’s chance but Cormier wins by TKO Rd 3.

Bonus pick:
Chris Cariaso over Sergio Pettis. Pettis has been getting by on his last name. Cariaso is very well rounded and will likely win by decision.