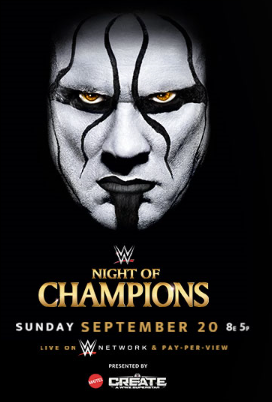 The WWE invades Houston Sunday for their annual pay per view Night of Champions that will air live on the WWE Network. The WWE is pushing Seth Rollins out there for two matches on the card. “The Architect” will face John Cena for the United States title and Sting for the WWE heavyweight title. There’s a lot going on so let’s get to it.

Rusev forgave Sumer Rae for being seduced by Dolph Ziggler a few weeks ago. The love triangle featuring Summer, Ziggler and Lana have given Rusev a chance to show a different side of his character that we haven’t seen yet. But Rusev doesn’t need a win to stay strong. In fact he could lose both girls to “The Showoff” and get a date on SingleHouston.com after the match. Ziggler, however does need a win and we think he will get it here with a distraction from Lana.

Dean Ambrose, Roman Reigns and a mystery partner vs. The Wyatt Family

Will it be Chris Jericho, Erik Rowan, Kane or Baron Corbin tonight as Ambrose and Reigns mystery partner? Maybe even the Rock will make an appearance tagging with his cousin and “The Lunatic Fringe”. It doesn’t really matter. The Wyatts will get the win. Braun Strowman will look strong and eventually set up a one on one with Reigns at the next pay per view.

The Dudley Boyz vs. The New Day

New Day Rocks! Or do they suck? Either way they are red hot and I don’t see them losing to the Dudleys at Night of Champions. The WWE has been teasing a table getting destroyed with the New Day going through it. The WWE strings the fans along here and we don’t get to see Kofi Kingston or Xavier Woods go through a table until the next pay per view. New Day Rocks! They also retain but we will get a rematch at Hell in a Cell in October.

Ryback has quietly become one of the top babyfaces in the WWE. But his history of injuries has made the WWE leery of pushing him all the way to the top just yet. Kevin Owens, on the other hand, is Triple H’s pet project. After debuting with a win over John Cena this Spring they continued their feud for most of the summer. Once it concluded Owens won a series of matches over the red hot Cesaro but now he sees poised to take the Intercontinental belt. Ryback will get in a ton of offense but Owens will find a way to win the belt. Owens leaves as the new champ.

Charlotte had the rug jerked out for under her on RAW Monday. Everyone thought that she had won the belt but unfortunately a title can’t change hands when you pin the champ’s twin sister. After retaining the title on RAW Nikki became the longest reigning champ in Diva’s history. Tonight the streak will end when Charlotte takes the title in Houston Sunday night by making Nikki submit.

After their trainwreck match at Summerslam that saw John Stewart cost John Cena his United States title Seth Rollins will have a short reign. With two matches tonight in Houston expect to see Rollins take a lot of punishment from both good guys. Rollins will look sharp but in the end Cena will hit the Attitude Adjustment and get the pin for the win and the belt.

Sting vs Rollins is the most intriguing on the card. Will the WWE put the strap on the former WCW champ or use him to put Rollins over as the future of the company? Will whoever walks away with the belt have to face Sheamus who is looming with his Money in the Bank contract? There are a lot of possibilities for this match. In the end we think Rollins gets the pinfall on Sting to retain the title. Sheamus will threaten but not cash in just yet. We will see that later in the year when Triple H pushes Rollins out of the Authority.