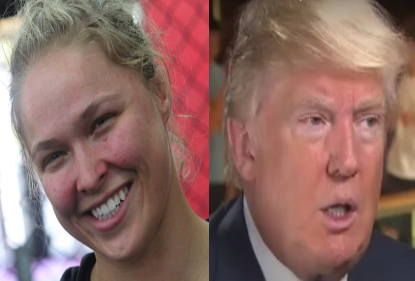 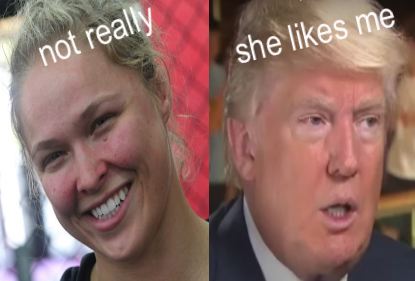 You just can’t escape “The Donald” these days. Trump is everywhere you look and making his case on why he should be the next President of the United States. In a recent CNN interview the real estate baron was asked if he supported women fighting in combat, specifically in the special forces.

“The answer is yes,” Trump stated. “Because they’re really into it… I tell you what, I know some women who are just – Ronda Rousey is an example, who likes me. I take her on my side, as a fighter. So the answer is yes, I would.”

We’re not sure what gave Trump the idea that Rousey was a fan, but the UFC women’s bantamweight champion and world’s most dominant athlete set the record straight.

Maybe Rousey will run for President one day. Can you imagine her leading the country? We can. We think she can probably do anything she sets her mind to and would likely do better than The Donald. That’s one President you would not want to piss off, that’s for sure.