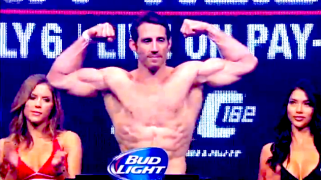 Head trauma and concussions are a major concern in all contact sports, in particular football, soccer, boxing and mixed martial arts. We’ve all seen the horror stories of guys who stayed in too long, who took too much abuse, who went too hard and paid a big price.

A lot of it was ignorance, that we just didn’t know that much about brain damage and just what repeated shots to the head were doing to us. Things are changing though, thanks in large part to the lawsuit filed by former players against the NFL and what the sports world learned as a whole through that process.

Current UFC welterweight champion Robbie Lawler didn’t spar for six years and it likely extended his career much longer than had he kept on sparring. Could he have become UFC champion had he not started sparring again when he began training with American Top Team? I guess we’ll never know. And he’s had some tough fights, taken some real damage. In the end we all hope it’s worth it.

Number seven ranked UFC middleweight Tim Kennedy hasn’t been sparring for a long time now and on a recent episode of The Fighter and The Kid podcast with hosts Bryan Callen and Brendan Schaub the 35-year-old Special Forces Weapons Sergeant explained why:

BRENDAN SCHAUB: How much longer do you want to do this?

TIM KENNEDY: I can fight for a really long time. Physically I could. I don’t spar anymore at all.

BRENDAN SCHAUB: Not in camp either?

BRYAN CALLEN: We keep hearing more and more of this.

In the end every fighter will have to educate themselves about brain trauma and concussions and come to their own conclusion whether or not hard sparring is right for them. During this same episode Schaub talked about a time in training camp where he’d been going hard with the sparring, taking damage to the head and felt like he needed a break but did not want to appear weak to his coaches.

Fighters want to be tough, that’s what they do, ignore the pain and keep fighting. That’s a great quality to have when your life is on the line. But if you’re not at war and you’re not in a real fight, it’s important for fighters to listen to their bodies and if there’s dizziness or headaches or some other symptom that’s telling you your body doesn’t really want to go get hit in the head again today, please listen and seek medical advice if it continues.

Learn more about concussions in sports at HeadCaseCompany.com and ConcussionTreatment.com.

Check Tim Kennedy’s full interview on The Fighter and The Kid in the video below (and yes, he does talk about Reebok):