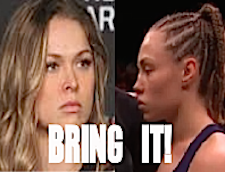 Strawweight contender “Thug Rose” Namajunas is taking up for “do nothing bitches” as Ronda Rousey calls them. The World’s Most Dominant Female Athlete made the comment during a recent promo in which she said every muscle in her body had a purpose, it was made for more than “f*cking millionaires”…. and she was no “do nothing bitch”. The fandom took off, a T-shirt was made for charity and Rousey-mania was in full force.

But not all of the queen’s compatriots are of the same mind. “Thug Rose” expressed her thoughts via Instagram and defended “do nothing bitches” around the world:

“And as far as Ronda goes I love her and what she’s done but I think her message is misinterpreted. I don’t think hurting and punching people in the face for millions is any better than using sex to make millions I like the positive message about body image though just think people are taking it the wrong way. Some of the coolest people I’ve met are strippers and down to earth loving people so just don’t judge others is my point. Good day”

She’s sorta got a point I guess. But it seems kind of nit-picky. Being a good person is nice. But someone training themselves to be the best mixed martial artist they can be is a better lot in life than someone stripping and being in the environment of a strip club. It doesn’t mean one person is a better human being than the other, but they are on different paths — and one is preferable over the other. One will take you further in the right direction than the other.

“Thug Rose” and Ronda are in two different weight classes so don’t get your hopes up on these two ever meeting in the cage. For now it’s an online scrap and Rose is 1-0.