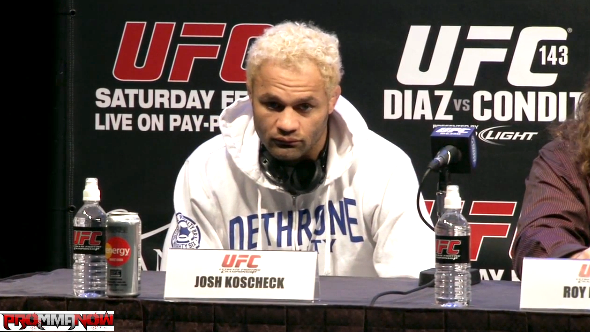 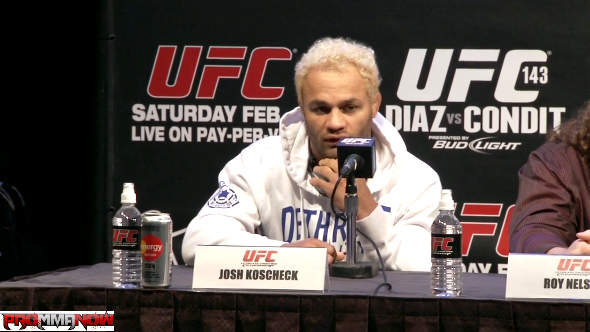 It often creates an odd feeling among co-workers when one of their own gets a promotion within the company. Often there’s a tinge of jealousy and a feeling of “it should’ve been me“. We’ve all seen it and probably even felt it. Former UFC welterweight contender and Ultimate Fighter season one semifinalist Josh Koscheck recently signed with Bellator and is now sharing his real feelings on what it was like under the UFC’s thumb and his frustration of not being offered a position within the company after his contract was up, like some others had.

Kos had lost five fights in a row when he left the organization earlier this year. The UFC didn’t offer him a new fight contract either but he says he wouldn’t have re-signed with them if they did.

Koscheck talked about the situation on a recent episode of Submission Radio:

“It just wasn’t fun for me to fight in the UFC. I figured I needed a change in my life and after signing this last contract with them I just wanted to get out my fights as quickly as possible so I could move on with my life and be done. Even if I never fought again after that last contract, this last fight that I had, I wasn’t going to re-sign with them, because it’s simple – you put 27 fights in, you give them 10 years of your life, you’d think that they would have stepped up to the game or stepped up to the plate and put a job offer in front of me or something to keep me involved with the UFC and the sport. But there was no talk of that. And so I decided that it was best for me to move on to Bellator anyway, because Scott Coker is so cool and I started my career on Spike TV and I would like to end it on Spike as well.”

Kos also touched on the idea of a fighters union and hopes that one day they will be able to organize:

“Look at the percentages of money that goes to the fighters. It’s probably like less than five or ten percent, versus them getting ninety? Ninety percent of the money. Yeah, you know these fighters need to be taken care of. For example if I never got a contract with Bellator. What was my retirement like? Do I have a 401k with the UFC? Did I have a job with the UFC after I’m done? My name wasn’t Chuck Liddell, Forrest Griffin or Matt Hughes, you know? Or Nogueira, you know? I think I’ve done more for the UFC than Nogueira without a doubt. And he gets a job. So where’s the discretion there? Where does it stop? Who’s to determine these types of things? Them. So there has to be somebody that represents the fighters.”

Do you agree the UFC should have done more to take care of Koscheck after so many years with the organization or is this just a case of a disgruntled former employee who was on his way out anyway getting a little jelly?

Kos is expected to make his Bellator debut in December against an opponent still to be determined.

The full Josh Koscheck interview with Submission Radio starts at about the 1:01:40 mark in the player below: