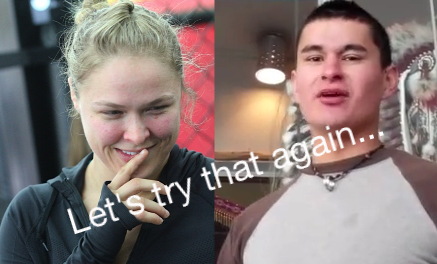 Most men have been shot down by a woman at some point in their lives, but it usually happens at some place like a bar, and at the most, a few people are around who may hear the exchange. Or it may happen on a dating app like Tinder and if the lady isn’t interested a simple swipe of the guy’s picture will erase him from her life forever and that’s that.

But when UFC women’s bantamweight champ Ronda Rousey shut down a potential suitor during her Reddit A.M.A. (Ask Me Anything) on Monday, the whole world got some insight into what kind of man the champ is and is not interested in.

QUESTION: Would you like to go on an actual date with me? Indy Pro Wrestler\ Military soldier, Kyle Hawk.

RONDA ROUSEY: Sounds tempting…. but I prefer a man to have the balls to ask me through a medium other than the Internet. Good try though- you sound like a catch. ;)

The first requirement… they need “balls”. The champ seems to be old-fashioned in the sense that she wants some form of real communication from the pursuant. Not just a “Hey will you go out with me?” on the Internet.

Indy pro wrestler Kyle Hawk take notes. She did say you sound like a good catch so maybe in the future if you do cross paths with the champ, well now you know exactly what you need to do. At least she knows your name now.

Rousey also gave her idea of a “great date”, saying she prefers doing “absolutely nothing”. “If a guy is lame, he’ll have to come up with activities to distract you from his lameness,” Rousey stated. “If he’s all kinds of awesome, doing nothing with him with be all kinds of awesome.”

Check out Hawk in action below. He’s the one throwing all the kicks:

Hawk may have a better chance at taking Rousey out on a date than this guy does.