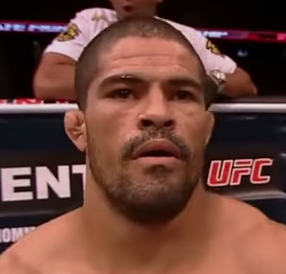 WSOF president Ray Sefo announced Tuesday that World Series of Fighting welterweight champion Rousimar Palhares was being stripped of his title and suspended indefinitely following his actions inside the cage at WSOF 22 Saturday night in Las Vegas.

Palhares was taking on UFC vet Jake Shields and repeatedly gouged him in the eyes when they were on the ground causing this:

The continuous eye-gouging definitely had an effect on Shields’ performance. Whether or not it changed the outcome of the fight we will never know — but it wasn’t a fair fight – and as Palhares has been known to do on multiple occasions (and even cost him his place in the UFC), when he locked on the fight-ending submission, he kept cranking on the kimura even after Shields had tapped and referee Steve Mazzagatti had stepped in to stop it.

“Not only did he did it [the eye-gouging] once or twice. He did it numerous times. And he was warned by the referee on four different occasions. He should have taken a point or maybe even disqualified him after he did it four times.

“I think he needs to speak to somebody and they’ll be able to tell us exactly what the issue is. When you talk to the guy outside of the [cage], he seems like a very polite, very nice guy. When he’s in there, something triggers and I don’t know what that is.

“I think the sad part of this is the guy is a great fighter. When Jake Shields is tapping nine times and the referee is tapping you six, seven times and literally pulling you off, that’s where people are gonna get hurt. We’re in a sport. We’re not in a war where we have to eliminate people.”

Nevada’s athletic commission is currently reviewing what happened at the fight and will make a determination on Palhares’ punishment once that process is complete. He could face a fine, suspension from the sport for a period of time, have the fight ruled a No Contest — or worse.