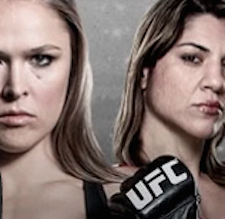 Be prepared, this week you will likely see a lot of Ronda Rousey and UFC 190 coverage here at PMN. The woman dubbed the “most dominant female athlete in the world” will put her judo and boxing up against the punches and grappling of unbeaten Brazilian Bethe Coreria for the UFC women’s bantamweight championship.

Correia has already taken out two of Rousey’s Four Horsewomen teammates and after each victory made it known she was gunning for Rousey and her belt. Now she gets her wish. Will she be ready for the best of the best or will she get slain like the rest?

The two took part in a media conference call on Monday. Listen in below.