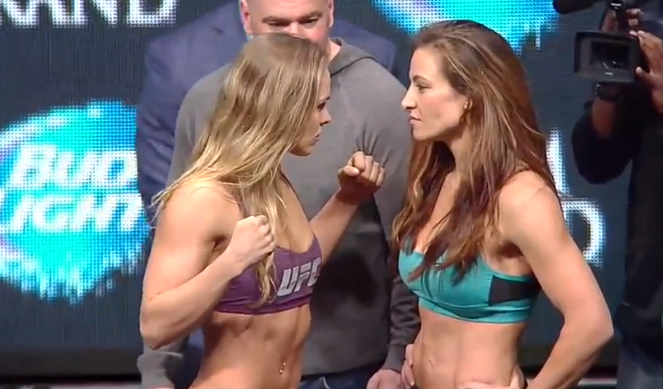 UFC women’s bantamweight Miesha Tate overcame some early adversity Saturday night to earn a unanimous decision victory over Jessica Eye in the UFC on FOX 16 co-main event. The win was Tate’s fourth consecutive since losing to Rousey in December 2013. It also earned her a third fight with UFC women’s bantamweight champion Ronda Rousey should Rousey defeat Bethe Correira next Saturday at UFC 190 according to UFC President Dana White.

Tate and Rousey have a history that is similar to that of Antonio Rodrigo Nogueira and Fedor Emelianenko. Tate was the Strikeforce women’s bantamweight champion prior to being defeated by the undefeated Rousey much like Nogueira was the PRIDE champion prior to losing to Emelianenko. Nogueira and Emelianenko went on to fight three times with Emelianenko winning two of the fights in dominant fashion with the other ending in a no contest. Rousey has defeated Tate twice already, but Tate put up a valiant effort in the second fight lasting to the third round before succumbing to another Rousey armbar.

Rousey is a heavy favorite against Correia at UFC 190 and will likely defeat her barring the biggest upset in the history of MMA. Rousey and Tate are natural rivals and bring out the best in one another, and despite being 0-2 against Rousey, fans will likely tune in to a third fight.