Cold-Blooded Dana White: ‘Stitch Duran and I were never friends’ 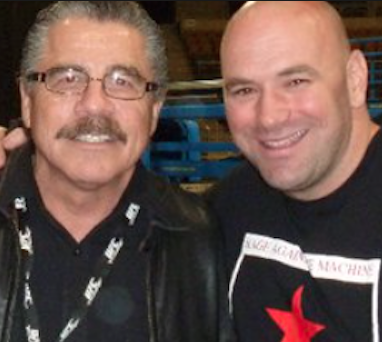 Surely by now, you’ve heard about the firing of legendary UFC cutman Jacob “Stitch” Duran for voicing his rather tame opinion on the UFC’s deal with Reebok and how he would be making less money because of it. Ever since the news came out last week the backlash online against the UFC has been pretty significant. UFC videos on Youtube that had nothing to do with the situation were getting hordes of “dislikes” and negative comments regarding the company’s termination of Duran, and the reaction from fans was similar all over social media.

In this new interview Fox Sports’ Karyn Bryant speaks with UFC President Dana White about Stitch’s firing and if there’s any chance he could come back.

“No, he won’t be coming back. And the crazy thing is, first of all, you realize we have 10 cutmen that work here at the UFC? We have 10 cutmen. Lorenzo and I decided that we’d hire cutmen for the fighters early on, when we bought the UFC. And Stitch Duran needs to learn what the meaning of the word ‘friend’ is. Stitch Duran and I were never friends. We were work associates. We can up together in the boxing world and when we hired cutmen he was one of the guys I brought in here. Friends are people you call on the phone, you hang out with, you talk to all the time. Don House, who is one of our cutmen, he and I were very close, and still are. But Stitch Duran was never my friend. And another thing about Stitch Duran, saying that I should have called him. I’ve never dealt with the cutmen ever. We have a department that deals with them. We weren’t friends, we’re not friends, and no, he shouldn’t have been expecting a call from me. And if he’s my friend, why didn’t he reach out to me, if we’re such good friends?”

Cold, right? That’s just cold-blooded and a lot of people are pissed because they can just imagine if they were treated like this by their own employer. White clearly says he brought Stitch on as a cutman when they bought the company well over a decade ago. Maybe they weren’t best buddies or didn’t even talk regularly, but he was the one that hired Stitch and the man has been a devoted employee of your company for many years. And it wasn’t like he wasn’t doing his job, all he did was tell the truth about his situation and how the Reebok deal would affect it.

Instead of trying to explain the UFC’s position, White just says (in effect), oh “we have 10 cutmen” and “he and I were never friends” — thus making Stitch completely disposable. And why should White personally take the time to call Stitch, when “they have a department” for that type of thing?

It’s gross. His attitude is gross and his arrogance is gross. The question is how long will the public continue to pay their hard-earned money to a company headed by someone like this. “Oh, it’s the fight game,” some will say. “It’s a tough business. People will get over it as long as there are exciting fights.” Yes… to an extent. But if you continuously devalue people in favor of your bottom line, there will come a tipping point.