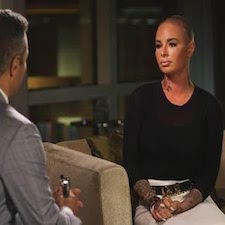 MMA has had it’s share of domestic violence cases over the years. It’s an ugly subject that needs to be addressed though and HBO’s Real Sports with Bryant Gumbel is doing just that. Real Sports’ 220th episode debuts Tuesday, July 21 at 10 p.m. ET/PT and will feature correspondent David Scott investigating domestic violence among pro MMA fighters and efforts by MMA organizations to address it. Scott talks to Christy Mack, who discusses the near fatal assault she allegedly suffered at the hands of her ex-boyfriend War Machine last year.