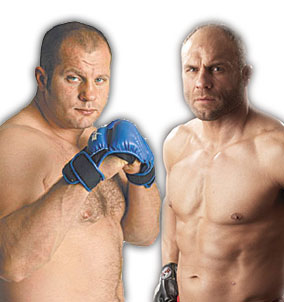 In October 2007 Randy Couture resigned as UFC heavyweight champion and left the organization and one of the reasons he cited was because they had failed sign Fedor Emelianenko. During that era Randy was coming off back-to-back wins in which he had once again won the heavyweight title, this time against Tim Sylvia, and he had also defended it against Gabriel Gonzaga. He had already been the UFC heavyweight champ and light heavyweight champ earlier in his career as well. In short, he was the man.

Fedor was the reigning Pride heavyweight champ at the time and was basically considered a god among men. It was the fight everyone wanted to see. Pride was no more and if Fedor was ever going to sign with the UFC, it was then. But the UFC just couldn’t get it done. For years there was the hope that the fight between Randy and Fedor was going to happen, but it never did.

Randy is now 52. Fedor is 38. Couture hasn’t fought since 2011 when Lyoto Machida gave him a front kick into retirement. He’s been doing movies, reality shows and whatnot, while Fedor enjoying his retirement, doing seminars, got a new woman, whatever. Could this fight really happen today in 2015? Or next year? Why the hell not? We just saw Kimbo Slice vs. Ken Shamrock for Christ’s sake. Ken Shamrock fought in motherf*cking UFC 1 goddammit. And if anyone could make this fight today it’s Scott Coker, and look who just happens to be sitting with Randy and doing this interview with Sports Illustrated but Mr. Strikeforce himself.

“Well obviously it’s a fight that in it’s heyday would have been an amazing fight and a cross over fight for that time,” said Couture. “Whether or not I’d be willing to step out there now at fifty-two years old and come back out of retirement, after four years of working on all the other stuff in my life, I don’t know. That would be something I’d really have to think hard about.”

Couture is then asked, “But you are not closing the door to this opportunity, potentially?”

I don’t care what you say if this fight goes down I will watch and you will too and you will like it. Enjoy the spectacle my friend, life is too short.