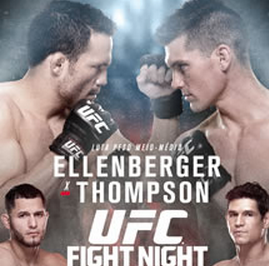 UFC 189 was crazy last night and the UFC is right back at it tonight with the TUF 21 Finale (The Ultimate Fighter: American Top Team vs. The Blackzilians) from Las Vegas to cap off International Fight Week.

The event will feature a headline bout between welterweight contenders Jake Ellenberger and Stephen Thompson, and will also include two ATT vs. Blackzilians match-ups from four of TUF 21’s best.

The first fight kicks off at 6:30 p.m. ET, join us here at PMN for live results of the entire card and round-by-round updates for the main card.

Round 1 – Head kick from Blanco. He then drops De La Torre with a right hook and referee Yves Lavigne stops it as De La Torre is looking for a takedown. It did seem rather quick.

Round 1 – Magana presses her to the cage being aggressive. Puts some knees to the thighs. Knee to the body from Waterson, then a judo toss, taking top control in half guard. Magana gets full guard and works the ground and pound. Magana throws up her legs for an armbar attempt. Magana stretches the arm out, Waterson looking like she’s thinking of tapping but eventually escapes. Magana gets to her feet as Waterson clinches her up for another judo throw, right into full mount. Waterson goes for her own armbar. 10 seconds to go. Magana escapes but Waterson takes full mount before the bell. Good fight and pretty close round. 10-9 Waterson.

Round 2 – Right hand and a body kick from Waterson. She throws Magana to the ground, but lets her up. Right hook from Waterson. Body kick from Waterson. Magana’s kicks are much slower, but she catches Waterson’s kick and dumps her on the mat. Waterson goes for another armbar. Waterson cranking on it, but Magana defends and gets mounted. Waterson heavy on top, landing some punches to the face, then a nice elbow. Magana gets half guard but it still taking elbows. Magana goes for a heel hook but Waterson escapes to side mount, moves to full mount, delivers a few shots then goes for an armbar. Bell. 10-8 Waterson.

Round 3 – Jab from Waterson, front kick. Waterson picking her apart on the feet. Front leg head kick from Waterson and Magana goes down. Waterson lets her up. Magana continues to plod forward and pay for it. Magana with a savage body lock takedown and takes full back mount of Magana, flattens her out. Ref wants Magana to fight back. Waterson sinks in the choke and Magana taps out.

Round 1 – Body kick from Cezar. Again. Perfectly timed takedown from Ferreira, takes top control in half guard. Jorge gets up and lands a right hook. Another right from Jorge. He catches a kick and makes Ferreira pay for it. High kick from Ferreira partially blocked. Right from Jorge, front kick. Ferreira pushes him to the cage. Elbow on the break from Ferreira. Ferreira shoots, stuffed. Ferreira clinches up pushing Masvidal to the cage. Masvidal lands a short elbow in the clinch, lands a couple rights, Ferreira goes down and Masvidal finishes him off with punches.

Masvidal calls out Matt Brown, who won last night at UFC 189, in his post-fight interview.

Round 1 – Lateral drop from Graves, lands on top in half guard. Luque gets to his feet but pays for it with a few punches. Elbow on the break from Graves as they move to the center. Graves presses him to the cage. Knee to the body from Graves. He backs out, spinning back kick. Luque with a successful punch/kick combo, but Graves takes him down with 2:30 to go. Graves controlling from top as Luque fights to get up against the cage. Luque gets up as Graves backs out and delivers a big leg kick. Knee from Luque, inside leg kick. Big double leg takedown from Graves. 10-9 Graves.

Round 2 – Takedown from Graves to start the round. Luque gets to his feet while maintaining three points of contact. Graves lands an illegal knee to the face of Luque but no point is taken and he seems okay. Luque with a punch combo as Graves pushes him toward the cage, Luque turns him around. They move back to the center. Graves gets another takedown and maintains top control for a couple minutes before Luque gets back to his feet, with one hand down. Graves is able to get off a couple knees. 10-9 Graves.

Round 3 – Graves presses Luque to the cage, lands a knee. Luque stuffs a takedown attempt after landing a punch. Graves on his knees as Luque goes for a D’arce choke but Graves pulls out and eventually gets a reversal and is on top in half guard. Luque gets to his butt with his back to the cage and makes his way up as Graves stays on him looking for the double leg and he scoops him to the canvas and lands an elbow before the bell. 10-9 Graves.

Round 1 – Usman presses him to the cage. Knee to the body from Hassan. Takedown from Usman, Hassan rolls to his feet. Left hook from Usman. Body jab. Right straight from Usman. Clinch, knees from Usman, presses Hassan to the cage. Knee to Hassan’s thigh, then a takedown. Hassan gives up his back. Usman with one hook in, but Hassan is able to shake him off and get up. Usman with another takedown, Hassan gives up his back to get up, Usman drags him back down and gets his back with both hooks in. Hassan scrambles to his feet but is taken right back down. Usman on top in half guard. Couple elbows from Usman. 10-9 Usman.

Round 2 – Usman wobbled with an uppercut, but he instinctually shoots for the takedown, gets it and takes full mount. He locks on an arm triangle but is in an awkward position and just before Hassan goes out, he taps.

Round 1 – Side kick to the body from Thompson. Low kick. Switching stances often. Body kick. Thompson goes for the kill but gets dropped with a counter punch. He shoots in and they clinch against the cage, Thompson pressing on him. Right from Jake on the break. Hook kick stuns Ellenberger. He shoots, stuffed and Thompson has his back. Ellenberger gets up but taken right back down. Thompson showing his wrestling here. Thompson with some big hammerfists and Jake gets to his feet. Two big straight lefts hurt Ellenberger. Thompson squares back up and delivers a spinning heel kick to the face that knocks Ellenberger down. Thompson follows up but Ellenberger gets up. Thompson with another spinning heel kick lands and causes Ellenberger to crumble. Thompson follows up with a punch and the ref stops it. Beautiful.