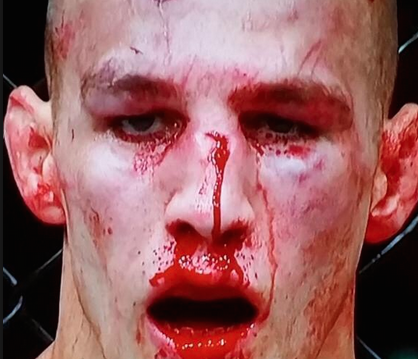 It’s hard to watch this and not feel what Rory MacDonald gave of himself for our entertainment. How concussed was he that he couldn’t even sit up? He looks like a soldier who just stepped on an IED and what you see is what’s left. Not much. Few people ever give that much of themselves to anything. I’m pretty sure he would have literally died in that cage had doctors and referees let it go on. That’s heart. That’s guts. That’s Rory fucking MacDonald. He doesn’t hold the title, but he’s a champion. Make no mistake about that.

How do you come back from something like this? For better or worse Rory MacDonald will never be the same after his fight with Robbie Lawler at UFC 189 on July 11, 2015 in Las Vegas.

Rory Tweeted this out earlier today, actually thanking Lawler for taking him where no one has before, making him dig deeper than anyone ever had, for Robbie Lawler showing him what he’s made of.

thank you @Ruthless_RL @ufc @Firas_Zahabi this was the best time of my life, ill never forget this fight pic.twitter.com/vKgWD6mp6e