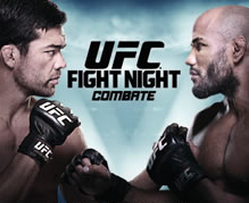 Round 1 – Martinez got dropped with a knee to the face and got hit with a couple more, but rallied near the end of the round.

Round 2 – Kakai scored a takedown, but Martinez got up pretty quick. Kakai lands a knee and takes Martinez back down. He gets up and walks Kakai down for the few seconds left in the round.

Round 3 – Kakai with a takedown with under 2 minutes to go but is unable to keep Martinez down. Kakai lands another knee to the face and mocks Martinez as he wings punches and misses and fails to land anything on Kakai.

Round 1 – Montgomery the much larger fighter. He inadvertently lands a knee to Sims’ face while throwing a kick and it stuns Sims. But Sims fires back with a quick straight left on the jaw a few moments later and Sims goes down face first. Sims follows up and ref steps in to stop further damage. Very impressive showing from Sims.

Round 2 – Gonzalez flails on a spinning backfist attempt and ends up on the ground with Silva looking for his back. Round ends with Silva in control.

Round 3 – Silva hurts Gonzalez with a knee during an exchange. He ends up taking Gonzalez’s back on the ground, but loses position and Gonzalez lands punches from the top in the final minute of the round. Gonzalez finishes strong even though Silva is able to get off and get off a couple shots.

By the way, Silva took this fight on Thursday.

Round 1 – About halfway through the round Oliveira scores a takedown and takes Merritt’s back, looking for the choke. Merritt is able to spin around for top control and drop some elbows. Oliveira is able to get up before the bell.

Round 2 – Oliveira lands some punches and gets a takedown, but Merritt is able to escape to top control once again where he drops some elbows and lands a knee as Oliveira stands up. Oliveira gets a takedown, takes Merritt’s back with both hooks in as he stands up. He drags him back to the ground, still looking for the choke. Oliveira misses on a triangle attempt and Merritt ends up on top before the bell.

Round 3 – Merritt with a takedown, mount, then lands a big knee as Oliveira gets up. Oliveira slams Merritt to the canvas and takes his back again, Merritt back up but Oliveira drags him back down a couple times, takes his back with a body triangle now. Round ends with Oliveira locking on the choke.

Round 1 – Makashvili lands a couple nice punches but Dias scores a takedown in the final minute.

Round 2 – Makashvili with a takedown early in the round but gets caught in a armbar attempt from Dias. Makashvili shakes him off momentarily, but stands up and dives in with a punch and gets caught in a triangle choke. Makashvili slams his way out, then goes back into full guard. Dias with a trip takedown with just under 2 minutes to go. Makashvili right back up though, but then gets taken down again a few moments later.

Round 3 – Dias takes a low blow and time is called. … Back at it and it’s a bunch of wrestling for the rest of the round. Makashvili ends the round on top inside Dias’ full guard.

Take a look at the knockout:

Round 1 – Carlos Junior looks enormous. Much bigger than Eddie. Nice jab from Eddie. Body kick from Junior. Gordon clinches up. Takedown from Junior. Gordon makes his way up, takes a few knees to the body from the clinch as Junior presses him to the cage and after a minute or two wrestling back and forth Junior takes Gordon down and lands some legit ground and pound, ending the round on top.

Round 2 – Gordon unable to find his range on the feet and looks uncomfortable. He ties Junior up against the cage. Gordon just starting to look more relaxed on his feet and Junior gets a takedown. Junior works the ground and pound and goes for a leg at the bell.

Round 3 – Junior with another takedown. He takes Gordon’s back with both hooks in and looking for the choke. After several moments and hand-fighting, Junior is able to Gable-grip the rear-naked choke and sink it in. Gordon taps out.

Round 1 – Beautiful technical stand-up battle. Larkin tearing Ponzinibbio’s legs up. Larkin so quick and technical and diverse. Ponzinibbio with continuous pressure, shoots for the single with just over a minute to go, can’t get it. Another big leg kick from Larkin. He catches a body kick. Delivers another low kick and an uppercut that just glances off the face of Ponzinibbio as he ducks in.

Round 3 – Uppercut from Romero, heavy heavy leg kick. Machida with a leg kick. Machida starting to look sloppy. Inside leg kick. Clinch takedown from Romero and he knocks Machida out with elbows straight away. Romero jumps the cage and they have to hold him back from the crowd. That was brutal.

After the fight Romero made this unfortunate statement: