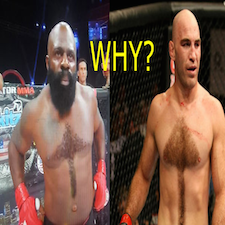 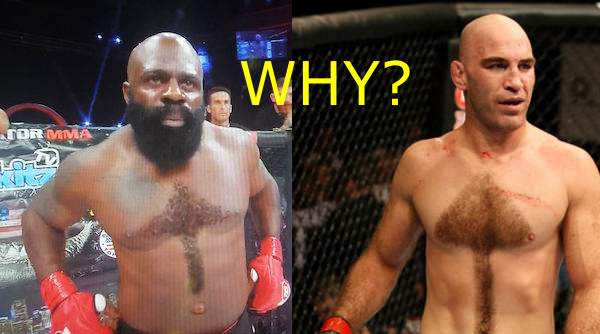 We’ve seen some odd fashion and hairstyle looks in MMA over the years. Who could ever forget Dennis Hallman’s speedos at UFC 133 or Chuck Liddell’s signature mohawk and mustache look. Remember the crazy designs Heath Herring used to shave in his head? Some looks have been good, some bad, some regrettable and even embarrassing. But fighters will seem to do most anything to set themselves apart and try and have the fans remember them. From green hair to mullets to beard sculpting, nothing appears to be off limits. …. Enter the utterly reprehensible chest hair arrow popularized by the likes of now retired UFC welterweight Brian Ebersole and the current man of the hour Kimbo Slice who knocked out Ken Shamrock at Bellator 138 this past Friday.

The first thing we have to ask ourselves is why. Why would a grown man at 41-years-old wake up one day and decide, “Today is the day I’m going to shave that arrow in my chest hair like I’ve been thinking about. Finally, today is the day!” Even more perplexing is why a man who made his name bareknuckle fighting in the streets and backyards of Miami would think this is a good idea? Are there no friends around him or family members who could’ve advised against this? You’re a street fighter for God’s sake. Get another tattoo, an Affliction T-shirt. Something. Anything but that chest hair arrow.

As far as Ebersole, he seemed like a fairly intelligent guy. But how can we really take you that serious when there’s a giant chest hair arrow pointing to your face. Ebersole said he did it to point to his chin because no one could seem to find it. … Considering what Omari Akhmedov did to him with low kicks at UFC Fight Night 68 last month, he should’ve shaved an arrow in his leg hair pointing to his thighs. The good thing about Ebersole now being retired is we don’t have to see that despicable thing on his chest anymore. Designs in beards are bad enough, please for the love of God let the chest hair arrow look die.