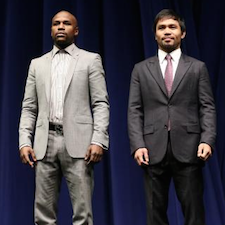 It was an odd sight to see numerous people on Twitter claiming that boxing was dead alongside reports of Floyd Mayweather getting his fight-night check for $100 million. Think about that. $100,000,000. One hundred million dollars. The real kicker is that check is only his first payment on the fight – he still has sponsorship money coming in alongside his cut of the pay-per-view revenue. While the PPV money will dwarf Mayweather’s sponsorship money, it was interesting to see Mayweather with two sponsors on his trunks (Hublot – a watch company whose premiums pieces sell for six figures, and FanDuel, a fantasy sports betting site) simply because Mayweather never accepts fight night sponsorships. However, even Floyd “Money” Mayweather saw the value in selling some of his trunk space for what was dubbed “The fight of the century”.

Many spectators described the match as a boring one, saying that Mayweather spent the entire fight “hugging” Pacquiao and running from him, and many of these same spectators took to Twitter and other social media to express their disappointment in spending $100 to watch the fight via Pay Per View. Regardless of how you feel about the fight itself, the larger question remains – is boxing dead? Was May/Pac the swan song of the once great sport?

The short answer is no. Boxing isn’t dead, and it never will be. Let me make this clear – I prefer MMA. I watch both. Always have, and always will, although I can also tell you that the number of MMA events I’ve watched in the past ten years significantly dwarfs the number of boxing events I’ve watched. I’m of the mind that MMA is more exciting than boxing. Ever since I watched the first UFC event (and looking at the state of the UFC then versus the UFC now is an often hilarious trip down memory lane), I thought MMA was more exciting. There’s no standing eight count in MMA. If striking isn’t working in MMA, you can take the fight to the ground. Not landing punches? Try for a knee or a kick. There’s just more action, and with my ADHD tendencies, I like consistent action in a fight.

That being said – I’ve been privy to plenty of snoozefests when it comes to MMA, and some terrible fights in general. Just awful fights. In addition to numerous UFC and Strikeforce events, I’ve been to plenty of low-tier shows – shows at fairgrounds, shows in parking lots – the first show where I served as a judge was a show where I had come to live blog the event and was asked by the promoter to judge because one of his judges hadn’t shown up. It was a lot of fun for me, and I’ve judged numerous MMA events since (along with a few boxing events), but that was just one of many times I saw a promoter that didn’t have their crap together.

Please don’t take my comments as an indictment of smaller MMA shows. I love going to small promotions and watching the fights – oftentimes you see the best of the local talent, and you can see some guys fight on a local level before they get their shot at a bigger promotion. I was fortunate enough to attend and live blog the first legal MMA show featuring professional fighters in Tennessee where a guy you may have heard of, Ovince St. Preux, won his co-main event fight with a highlight-reel headkick KO. But I’ve also been to local MMA shows where smoking was permitted inside the venue, only feet from the cage, and I’ve seen more than a few fighters smoking before and after their matches – smart decision, right?

But that’s not to say there are plenty of terrible boxing events put on as well – there are, all across the country. Reports of corruption run rampant in boxing, but every so often, you’ll hear a similar report coming out of the MMA community. Bad promoters, managers, sponsors, and events are not mutually exclusive to one sport or the other – they’re present in both.

Despite all that, boxing has not only survived, but thrived. It is true that events like MayPac are the exception rather than the rule, but large promotions in boxing are not only heard of, but common. Wladimir Klitschko’s recent fight against Bryant Jennings drew an average of 1.6 million viewers. Just next weekend, Saul “Canelo” Alvarez will take on James Kirkland in a 50,000 seat arena in Houston, Texas. Sure, a couple weekends after that, the UFC will put on arguably its largest card of the year in UFC 187, but neither of the main event fighters on that card (Anthony Johnson and Daniel Cormier) will get paydays close to what Canelo and Kirkland will.

Add to that the recent expanded TV exposure given to boxing in the form of Al Haymon’s Premier Boxing Championships, broadcast on NBC, which in its most recent show averaged 2.9 million viewers. Despite threats of anti-trust lawsuit for potential violations of the Muhammad Ali Boxing Reform Act, Haymon’s initial foray into boxing on NBC has gone very well, and those numbers do not suggest a dying sport.

So why were people so quick to take to social media to proclaim the death of boxing? Because MayPac was, for many, not that entertaining. But consider this – Floyd Mayweather has never really been what many would call an “exciting fighter”. He’s a counter-puncher, not a knockout artist. Sure, he’s had some knockouts, but his only recent knockout was of Victor Ortiz in a controversial moment following the referee halting the fight due to an illegal headbutt by Ortiz. Then why did people expect the fight to be so exciting? There are a few reasons for this. 1) People have wanted this fight to happen for years, and two of the best pound-for-pound fighters would have to be exciting. 2) Mayweather isn’t the king of knockouts, but he is the king of pre-fight marketing and buildup. 3) Pacquiao is a volume puncher and he’s not afraid to get in there and mix it up.

But for many, the fight did not live up to the hype. Pacquiao wasn’t able to mount a real offensive challenge to Mayweather whether it be due to reports of his shoulder injury or Mayweather’s defense, and Mayweather was smart enough to not stand in the center of the ring and exchange with Pacquiao. Mayweather fought the better fight, and he won. But to many, it was a sign of the end of days that the fight that so many had wanted for so long was not more exciting. Not to mention, Mayweather only has one fight left on his contract with Showtime, a fight that he has repeatedly claimed will be his last – and after the buildup (and subsequent letdown) of the fight with Pacquiao, how can one even really get that excited for Mayweather to fight someone else?

Combine that with the fact that many of boxing’s other stars simply do not have the star power that Mayweather does, or the draw and rabid fanbase that Pacquiao has, or they do not produce exciting fights. Canelo and Klitschko are both great fighters, but lack a true popularity inside the states due to the fact that neither of them are from the United States. Andre Ward (28-0), one of the most dominant American fighters, has held seven titles in some form or another, but is considered by many to be a boring fighter. He fights very well, but isn’t particularly exciting, and since he doesn’t live the lavish, flamboyant lifestyle that Mayweather does, he doesn’t draw the pre-fight hype of Mayweather, and due to promotional disputes, has not fought in almost eighteen months. There are no shortage of other boxers that could be mentioned, but none of them have the draw of Mayweather.

But despite that, boxing survived without Mayweather twice before (before he started fighting and when he took a two-year hiatus from the sport), and it will continue to survive without him. Just as there are MMA gyms popping up all over the country (and world), there are boxing gyms and clubs in just as many cities. Additionally, boxing is still an Olympic sport. While being an Olympic athlete is not a financial boon for most, there is a certain prestige that comes with representing one’s country in a competition against the rest of the world, and despite cries and (largely useless) petitions for MMA to become an Olympic sport, I doubt we’ll see that any time soon.

I don’t know specific numbers, but I would guess there are more boxing promotions than MMA, and even having more weight classes helps keep boxing alive as well. Nevermind the fact that I think the number of weight classes in boxing is ludicrous – the large number allows for fighters to compete in any number of different divisions.

If boxing is dead, then why were so many “MMA ONLY” sites quick to report results from the fight, post pre-fight videos, and offer commentary on the event? Site owners know it’s about analytics and search engine optimization, and this past week, everybody was searching for Mayweather/Pacquiao.

Boxing also has a longer history than MMA and thus had a longer time to develop its fanbase, a fanbase that, at the highest levels of the sport, also packs more star power than MMA. Michael Jordan, Denzel Washington, P. Diddy, Mark Wahlberg – when was the last time you saw any of these guys at a UFC event, let alone cut a promo for an event (Diddy and Wahlberg had a prefight promo for MayPac). When was the last time you saw a ticket to an MMA event sell for more than $40,000 on a secondary ticket market site like StubHub? You haven’t, because it hasn’t happened, and likely won’t.

Boxing isn’t dead. The more appropriate statement that all of these fans could’ve been tweeting last night (and some were) is that boxing isn’t as exciting as MMA. Sure, boxing does have its exciting moments, and share of knockouts, but pound-for-pound (or fight-for-fight, if you prefer), MMA has more finishes, and obviously a wider variety of finishes since more techniques are allowed. You’ll never see an inverted triangle in boxing. You’ll never see headkick KO in boxing. MMA fighters will likely never see a paycheck for $100 million, but since I’m not a fighter, I’m ok with that, because I know there are plenty of MMA fighters for me to watch who are still going to get in the cage fighting like $100 million is on the line.

One thought on “Boxing isn’t dead, but that’s okay”