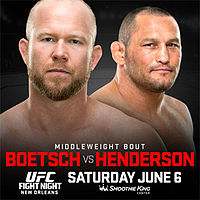 UFC officials have announced a brand new main event for the upcoming UFC Fight Night New Orleans event that’s set to take place on June 6. A middleweight scrap between Tim Boetsch and Dan Henderson will now replace the original main event of Daniel Cormier and Ryan Bader. It appears that Bader will no longer fight on the card after Cormier was given the title shot against Anthony Johnson at UFC 187 later this month.

Both Boetsch and Henderson are coming off off uninspiring losses in the last outings in January. Boetsch was submitted by Thales Leites and Henderson was knocked out by Gegard Mousasi. The loser of this fight will likely be out of the UFC as both are no longer contenders in the division and are clearly on the downside of their careers.