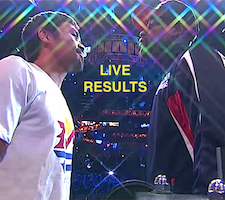 The unbeaten Mayweather (47-0), boxing’s pound-for-pound king, puts his WBA/WBC welterweight titles on the line against Pacquiao’s (57-5-2) WBO belt in the main event, while a super bantamweight bout between Leo Santa Cruz and Jose Cayetano, and a featherweight title match between Vasyl Lomachenko and Gamalier Rodriguez will be on the PPV undercard. There are also four non-televised preliminary bouts on the card.

Round 1: Here we go, finally. Remember this night. Right from Floyd just misses.  Body shot from Manny. Floyd with a triple jab, not landing but throwing. Right counter from Floyd. Floyd working the jab. One minute to go. Pac Man being reserved, maybe hesitant after that big right. Another right counter from Floyd lands solid. Floyd backed into the corner at the bell. 10-9 Mayweather

Round 3: Left to the body from Manny. Right to the body from Floyd, a bit below the belt. He’s warned. Floyd backed to the ropes, just avoids a big left from Pacquiao. Floyd backed to the corner, they tie up until separated. Left connects from Mayweather. Floyd just misses a KO calibre right. Right hand from Manny connects and Floyd fires back same before the bell. 10-9 Mayweather

Round 5: Left to the body from Manny. Floyd with a couple nice power rights. Right straight to the body from Floyd. Manny stalking. Brief clinch/headlock from Floyd. Pacquiao has him backing up, misses. Floyd dances around the final moments of the round avoiding engagement. 10-9 Mayweather

Round 6: Combo from Pacquiao, lands a straight left on the button moments later. Floyd backed to the ropes, brief tie-up. Left hook counter from Floyd. Left to the solar plexus from Manny. Left counter from Manny. He backs Floyd to the ropes and works the body with a combo. Floyd shakes his head no and Manny unloads another combo to the body and head. Floyd comes back with a few shots but he’s backed into the corner now. Back to the center. Left from Manny. 10-9 Pacquiao

Round 9: Manny backs him up with a couple shots. Floyd counters. Repeat. Left from Manny. Right from Floyd. Couple of counter left jabs from Floyd. Right cross from Floyd. Straight right. Manny with a couple big lefts to the body as he backs Mayweather to the ropes. They tie up in the final moments and that prevents Pacqiao from getting any more off. 10-9 Mayweather

Round 10: Pacquiao landing at 18% in this fight so far. A left to the body and head from Manny. Manny backs him to the ropes again and that’s where he’s had his biggest success. He lands a couple but Floyd circles back to the center. Right from Floyd. One two from Manny who backs him to the ropes again where he scores with a couple shots. Combo from Manny as Floyd ducks into it. 10-9 Pacquiao

Round 11: Big right from Floyd to the side of the head. Left to the body from Manny. Left hook straight right from Floyd. Right from Floyd to the top of the head. Left from Manny, one more to the body. Left, and an overhand left as he backs Floyd on the ropes. Right hook. Floyd in the corner, Manny with a combo. Straight left. Floyd in the corner and Manny trying to catch him. Floyd lands a couple counters on his way back to the center. Floyd lands a couple check hooks. And avoids Manny’s attack the remaining moments, landing a counter jab. 10-9 Mayweather

Round 12: Right jab from Manny. Floyd with the jab. Left to the head, another to the body from Manny. Left to the body from Manny with 90 seconds to go in this historic fight. Manny chasing him. May weather running. Nothing. 10-9 Pacquiao. … Ehhhh. Not a very good fight to be honest. Not much action from either guy. There were a few moments of impressive engagement but I have to say it kind of played out like I thought it would with Floyd avoiding punishment and Manny not able to find him for that KO win. Floyd should win it decisively on the scorecards.

One thought on “Mayweather vs. Pacquiao live results and round-by-round updates”