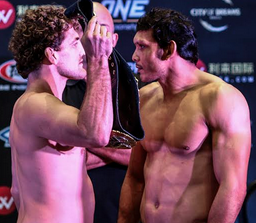 ONE Championship held weigh-ins today for Valor of Champions which takes place Friday at the Mall of Asia Arena in Manila, Philippines. ONE Welterweight Champion Ben Askren came in at exactly 170 pounds, while his opponent Luis “Sapo” Santos also hit the mark at 170. The two will face off in the Valor of Champions main event as Askren (14-0) pits his perfect record against the incredibly dangerous and experienced Santos (61-9-1).

Askren seems to have made the transition from just a wrestler to a mixed martial artist as he has stopped his last four opponents within the distance; three via TKO, one via submission. Santos, on the other hand, has stopped his last SEVEN opponents in a row; six by T/KO, and one by submission. The 35-year-old American Top Team product is one of the best fighters (and most experienced) never to have set foot inside the UFC Octagon.

Santos does have losses to Ryan Ford and Ben Saunders back in 2011-2012 in Bellator, and Askren will not only be Sapo’s biggest test since then, it will be the biggest test of his career — by far. Nobody’s really given Askren a run for his money. Will Santos be the one? Just looking at Santos’s win/loss ratio is damn impressive. And while he has yet to get that marquee win, Askren would be the first.

Askren has made his game plan clear. “Luis Santos is not going to take the ONE Welterweight World Championship from me. I’m going to walk across the cage, take him down and beat him up, and there’s nothing he can do to stop me,” said the champion.

The ONE: Valor of Champions co-main event has been moved to a catchweight after Bashir Ahmad took the bout with Amir Khan on short notice to replace Shannon Wiratchai.

Here are the full weigh-in results:

Tune into ONE: Valor of Champions online via live streaming on April 24 at www.onefc.com/livestream. The event will be available for purchase for US$9.99.