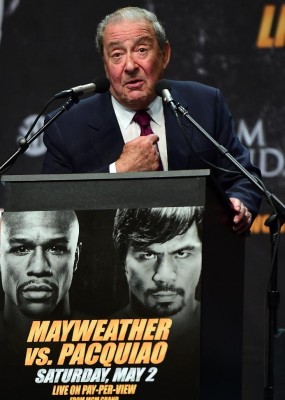 It is safe to say Bob Arum is excitable. During the media conference call for Manny Pacquiao the promoter of Manny’s upcoming fight with Floyd Mayweather Jr. on May 2nd stopped the call just 12 minutes in. A question came from a journalist representing The Examiner and then this happened.

Most likely it wasn’t the person asking or the question that prompted the abrupt ending. Freddie Roach, Pacquiao’s trainer, did comment on Manny’s training.

We are ready to go. We had a great training camp and good sparring partners. Roach said of the mega showdown with Floyd Mayweather on May 2 at the MGM Grand Hotel and Casino.

But, what happened? Top Rank issued a statement about the situation later.

At the top of the hour there were a massive number of calls from the media. Our conference call system which worked for years literally went down and we were unable to communicate with our operators. This was very unfortunate and we apologize.

This is one of the most anticipated boxing matches in history and for a technical glitch like this to occur with hundreds of millions of dollars potentially to be made is almost unbelievable. Someone is getting fired.

Bob Arum gave Kevin Iole of Yahoo Sports his take on what happened.

It was going to be an absolute disaster. I said we either do it the right way or we won’t do it. The best way is to get four or five of the top guys and put them on the phone. I didn’t want Manny on there having to listen to all this nonsense.

Hearing that it makes more sense. No promoter wants their fighters to endure conversations during the call explaining technical problems with the media growing more frustrated every time. Manny needs to focus on his fight and shut Floyd Mayweather up who has ducked this fight for years. It wasn’t until Pacquiao got knocked out that Floyd started requesting the fight heavily.