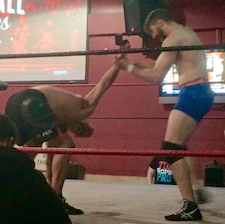 UFC fans will remember Chuck “Cold Steel” O’Neil (15-6) from his stint on The Ultimate Fighter 13 as part of Team Lesnar. O’Neil made it to the quarterfinals where he lost to eventual tournament winner Tony Ferguson. He also fought on the TUF 13 Finale card where he dropped a decision to Chris Cope. Since his time with the UFC O’Neil has gone 7-2, is currently riding a four-fight winning streak and holds the CES welterweight title. His next MMA bout was just announced today for June 12th when he will defend his belt against Dominique Steele at CES MMA XXIX live on AXStv.

In addition to mixed martial arts, O’Neil is dipping his toes into the pro wrestling waters and made his debut this past weekend for Top Rope Promotions in Seekonk, Mass. where he took on his best friend/main training partner Eric Spicely. When you watch the match you can tell the 29-year-old Massachusetts native (and Spicely too) has a natural talent inside the ring. Like MMA, pro wrestling also has a regional circuit, and from the looks of what we see here in Cold Steel’s performance, he’s got a bright future if he sticks with it.

O’Neil tells us he plans to do just that. “I’ve been training under Chris Girard (aka Biff Busick for his in ring name) and we train at the Chop Shop in Providence, R.I.,” O’Neil stated. “Me and my best friend/main training partner Eric Spicely have been doing it since January. Both Eric and I love pro wrestling and MMA so we’ll both be continuing our MMA career and progressing with our pro wrestling career. See how far we take it.”

We’ll be watching, Chuck. Do your thing brother.