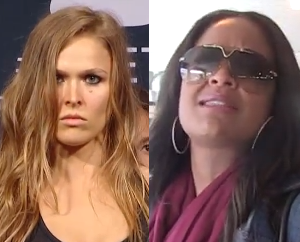 Laila Ali hasn’t fought professionally in eight years. Now 37, the daughter of the great Muhammad Ali achieved great success in boxing herself, retiring with a perfect 24-0 record with 21 knockouts and collecting multiple titles. She fought primarily at super middleweight (168 lbs.) and is 5’10” tall. TMZ recently caught up with Ms. Ali to get her thoughts on Mayweather vs. Pacquiao, who her father is picking to win and whether or not she thinks she’d beat UFC women’s bantamweight (135 lbs.) champ Ronda Rousey in a fight. Laila at first says she won’t answer the question because she isn’t a UFC fighter and Ronda isn’t a boxer. But when pressed she says no woman can beat her, not even Ronda because she’s too small.

The idea of a great boxer taking on a great MMA fighter isn’t a new one and Randy Couture reminded everyone not so long ago what happens when someone who possesses great boxing skill and little to nothing else steps inside a cage with a mixed martial arts expert. Forget Ronda Rousey. Laila Ali would lose against every UFC women’s bantamweight fighter on the roster. And that’s no disrespect to Laila Ali. She was a great boxer, but that is only one aspect of fighting. A simple takedown would completely take her out of her element as Couture showed against James Toney, as Royce Gracie showed against Art Jimmerson, and as Gene LeBell showed against Milo Savage.

The weight discrepancy between Ronda and Laila is a non-issue as Rousey routinely walks around at a much heavier weight than she fights. And even if she didn’t, she would still beat Laila. But as a former champion herself, Laila still seems to carry that mentality that believes she can beat anyone, anytime, anywhere. And that’s what makes her a winner. Look at her dad, Muhammad Ali believed he was the greatest of all time — and really might be — but she would still lose in a mixed rules match against Rousey. If it was strictly a boxing match, now that might be a different story.