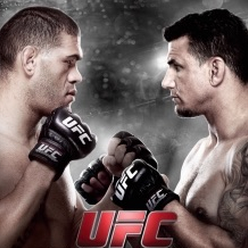 UFC Fight Night 61 took place on Sunday night in Brazil and saw former UFC heavyweight champion Frank Mir turn back the clock with a stunning first round knockout win over Antonio “Bigfoot” Silva. Mir had lost four consecutive fights going into the bout and was a underdog by bettors, but a short left hook changed all that in front of Silva’s Brazilian brethren. In the co-main event, Michael Johnson put on a spirited performance as he took a unanimous decision win over Edson Barboza. Johnson used a lot of pressure and combinations to keep the Brazilian moving backwards and called out former UFC lightweight champion Ben Henderson for his next bout. There were a number of knockouts on the preliminary bouts, so be sure to check them out  in the fight video highlights below: