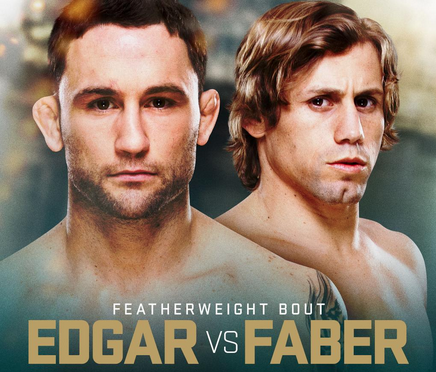 The UFC will make it’s first visit to the Philippines on May 16th when former champions Frankie Edgar and Urijah Faber meet in the UFC Fight Night 65 main event live on Fox Sports 1 from the SM Mall of Asia Arena in Manila.

The bout will be contested at featherweight (145 lbs).

While rumors of the bout circulated earlier in the day, the UFC officially announced the bout Wednesday evening on UFC Tonight.

Edgar (18-4-1), a former UFC lightweight title holder, has been on a three fight tear since he lost to 145 pound champion Jose Aldo in his featherweight debut back in Feb. 2013. Edgar has reeled off consecutive wins over Charles Oliveira (decision), BJ Penn (TKO), and most recently, Cub Swanson (submission).

This bout will mark Faber’s (32-7) first fight at featherweight since he lost his WEC title to Jose Aldo back in 2010. Since then he’s been fighting at bantamweight, done well, but come up short in title fights. And now that his teammate TJ Dillashaw is the 135 pound champ, a return to 145 pounds seems appropriate.