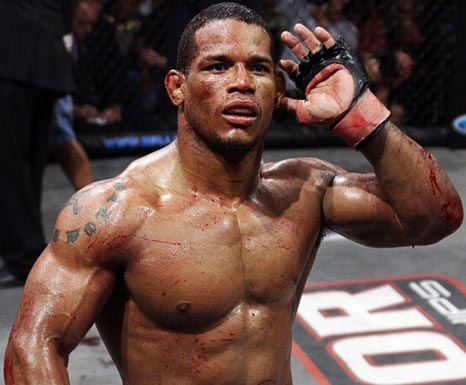 Former UFC welterweight champion Georges St-Pierre is starting to look like a freakin’ genius. The former long-reigning 170-pound champion retired from the sport while still holding the title citing rampant PED (performance enhancing drugs) use among the athletes and too lax testing procedures from the state athletic commissions and the UFC.

And in an interview on Monday’s episode of The MMA Hour with Ariel Helwani, St-Pierre said he wasn’t surprised by Anderson Silva’s recent positive test — and he said more high profile fighters will also be caught cheating.

MMAFighting.com has the scoop:

The 37-year-old Lombard tested positive for the anabolic steroid desoxymethyltestosterone, according to the report. Online resource Wikipedia calls the performance-enhancing drug, which is also known as “DMT,” “one of the first designer steroids to be marketed as a PED to athletes and bodybuilders.”

Interestingly enough, it appears the commission have had the results of Lombard’s failed test since mid-January. Why those results are just now being released is not known.

Lombard (35-4-1, 1 NC), unbeaten with three straight wins at welterweight, was originally slated to fight Rory MacDonald at UFC 186 on April 25th. However, that fight has now been scrapped and the organization is in search of a replacement for MacDonald.

And if GSP is to believed — and at this point how can he not be — be prepared for more high profile UFC fighters to get popped in the near future. Stay tuned…
[ads1]
[ads2]