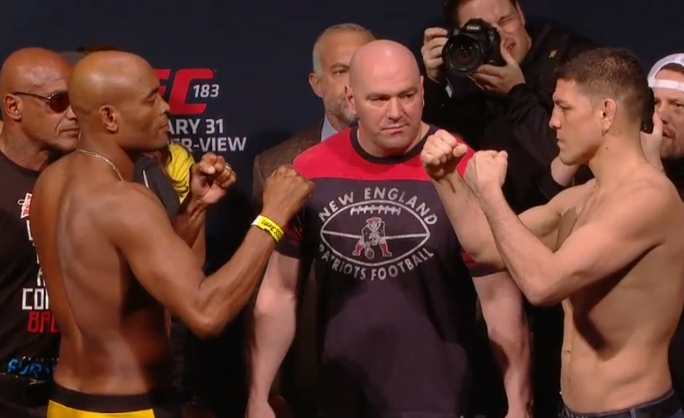 What started off as a great year has turned into a disappointing start to February. No Belfort vs. Weidman, Faber vs. Assuncao and now we are less than 24 hours from being notified that Nick Diaz failed a drug test for weed as well as Anderson Silva was on steroids.

Let’s start with Nick Diaz. He’s had his issues with the left handed cigarettes. This isn’t his first venture into failing a drug test for marijuana. Let me say, I don’t care that he smokes weed. It seems like that’s his thing. Did it enhance his performance? No. Did it help cause some weird moments such as laying on the canvas? Maybe. He’s gonna be screwed though. Nevada isn’t that cool when it comes to multiple time offenders. He’s already sat out a 18 months worth of suspensions. This will be the third strike for him.

Anderson Silva on ‘roids? I didn’t see that coming. I’m not shocked but I am just dumbfounded that this is what will probably stain his status. MMAFighting is reporting that Aderson Silva not only tested positive for Drostanolone metabolites in a Jan. 9 out-of-competition drug test, but traces of the banned substance Androstane were also found in his system, according to Nevada Athletic Commission (NAC) executive director Bob Bennett.

The UFC has released the following statement on this cluster bomb.

“On Feb. 3, 2015, the UFC organization was notified by the NSAC that Anderson Silva tested positive for drostanolone metabolites on his Jan. 9 out of competition drug test,” the UFC said in a statement. “UFC’s understanding is that further testing will be conducted by the commission to confirm these preliminary results.

“Anderson Silva has been an amazing champion and a true ambassador of the sport of mixed martial arts and the UFC, in Brazil as well as around the world. UFC is disappointed to learn of these initial results.”

So we know the NSAC’s hammer will drop but how hard. What do you think about this? Sound off in the comments.