The worst chick street fight ever, maybe all fights 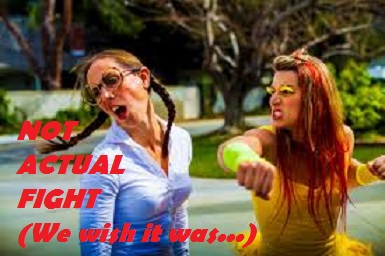 Redneck and gangstas love to fight. Whether it’s to test their strength as a man, to look cool, or to try and be popular. Maybe because they saw it on TV who knows. Mostly all of the fights I saw were awful and consisted of a slapbox themed scrap or head down windmills until someone shoots for a take down. If you were training heavily in martial arts at the time no one messed with you because of your reputation and if they did it ended badly. Most guys who know they can fight say out of trouble, but there were some like me who were picked on as a kid, then kicked the living dog s%^& out of the bullies in high school often as revenge. Ah, the golden years… Wait, I was getting to the point here.

When chicks fight it can be awesome or it can be the saddest thing you ever saw. Shovel girl is one of our heroes here at ProMMANow because on the mean streets of suburbia they carry shovels yo, and they are not afraid to use them. THUG LIFE! This video though….I mean….these two chicks…they are trying to fight, but you can tell it is to get attention and it’s bad. Very bad. This is worse than watching a Scott “Lionheart” Blevins fight and that is also bad, very very bad.

We bring you only the best and gosh darnit here is some quality video of masters in the art of suck-fu. They try so hard to fight, but cannot figure out how to get it started let alone keep it going. It’s like two peacocks fanning their feathers asking what the hell to do next.

As always we apologize in advance and you’re welcome!