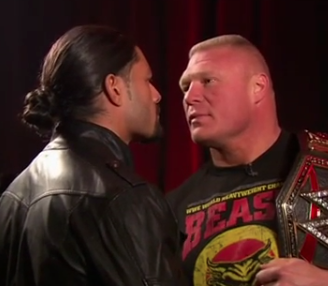 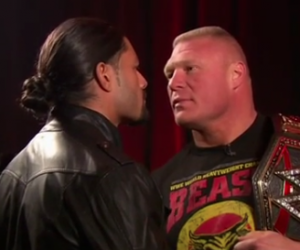 WWE heavyweight champion Brock Lesnar and his upcoming opponent for WrestleMania 31, Roman Reigns, met face to face for the first time since Lesnar successfully defended his title against Jon Cena and Seth Rollins, and Reigns won the 30-man Royal Rumble 2015 on Sunday. Lesnar had one of the best matches of his career against Cena and Rollins, while the majority of fans were not happy seeing Reigns win the Royal Rumble. Paul Heyman seems to know Reigns inside and out and thinks he has no chance against the Beast Incarnate. Will Lesnar hold on to his title or will Reigns cement his place amidst the top of the WWE Universe? Watch the intense meeting between these two below.