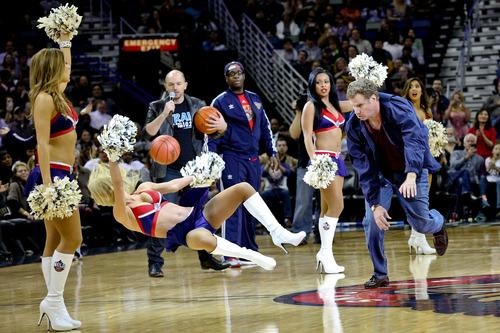 “Drunken” Will Ferrell was supposed to be taking a half court shot and instead turned and fired at a cheerleader point blank range at a Pelicans game. He literally crushes her and she is sent flying backwards, pom poms flailing and flopping in the air.

The report is that this is for a an upcoming film. In this film Will plays a man whose life gets all screwed up and takes revenge on his ex. Whatever the film is called this scene makes it look watchable and probably will see Ferrell in rare form. Most of his characters tend to be the same like Adam Sandler, but funnier. I can’t wait for this film, regardless.