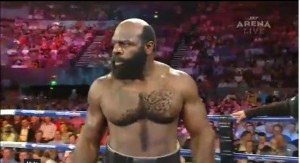 After a near five year hiatus from MMA, the YouTube sensation Kevin Ferguson a.k.a. Kimbo Slice is back in the MMA fold according to a report by CombatPress.com.  Kimbo Slice has agree to terms with Bellator MMA and is expected to fight for the organization soon.

Ferguson is responsible for some of the highest rated MMA shows in network television, and it appears that Bellator head man Scott Coker is looking to try and recapture some of that magic as Bellator MMA is in dire need of star power.

How would you classify the move by Scott Coker? Is it any different than the UFC signing CM Punk?