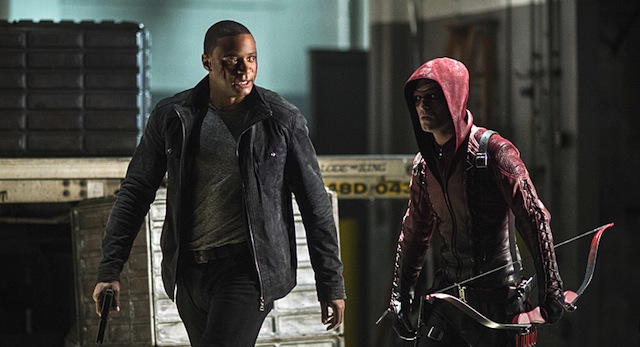 So we all know Oliver Queen is not dead, let’s be honest. He may have been stabbed by the misguided villain Ra’s al Ghul, but he isn’t dead or the title of the show would be “Not ARROW”. The show resumes next Wednesday and we are amped.

Some of the photos that have emerged show Laurel in her Black Cat costume taking up the mantle of her dead sister’s alter ago. Merlyn is involved and that’s never good because drama follows that guy like groupies follow Conor McGregor.

Vinnie Jones is in the house. He plays Danny Brickwell who is a hard hitting thug and we know he will knock it out of the park.

Here is the official synopsis of the next episode entitled, “Left Behind”. The new episode airs Wednesday, January 21 at 8:00 p.m. ET/PT. Also below is an extended trailer for the episode, posted on the series’ Twitter feed.

In the aftermath of Oliver’s fight with Ra’s al Ghul, Diggle and Arsenal continue to protect the city in the Arrow’s absence. However, after three days without hearing from Oliver, they begin to fear the worst may have happened to their friend. Felicity refuses to believe that Oliver could be dead until Merlyn pays the team a surprise visit. Thea suspects there is something more behind Oliver’s disappearance and asks Merlyn for a favor. Meanwhile, Ray tests a part of his new suit and Laurel takes up the mantle of the Black Canary.