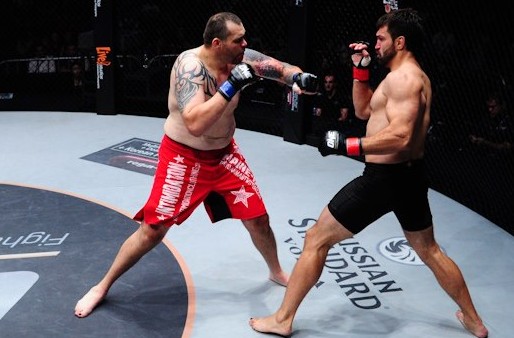 Tim Sylvia showed up to a fight this past weekend looking like he ate his opponent before squaring off for the photo. 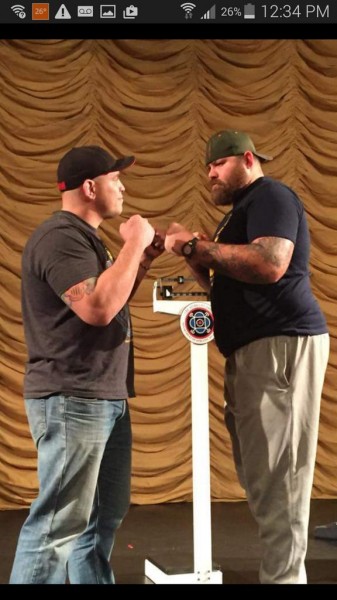 On January 4th, 2015 at Mohegan Sun in Connecticut former two-time UFC Heavyweight Champion Tim “The Maineiac” Sylvia was scheduled to fight against one Juliano Couthino. According to sources Tim Sylvia tipped the scale at a whopping 371lbs, well over what he weighed when he was UFC Heavyweight Champion. The Mohegan Sun commission decided that it was in Sylvia’s best interest to not compete, believing the super-athlete to be unhealthy. Sylvia’s camp stated it was an MRI that forced his retirement after getting denied from fighting.

Let’s take our own look back before we get to the PR version of Monte Cox.

Let’s face it. For the most part Tim Sylvia invented the phrase, or I did actually for the record, “Stand and bland”. His fighting style consisted of jabbing and more jabbing while using his height advantage to pressure opponents. I call his style by another name, “Jab and Pray”. Tim started off being a finisher, but over time for the most part he could only manage boring decision victories against people not named Arlovski, and even with Andrei they made a stinker of a 3rd fight.

Sylvia was a big guy who bullied shorter guys. Testing positive for banned substances cost him the heavyweight championship after beating tomato can, or “Tomato” Gan Mcgee in 2003. After that fight Tim was never the same.

Sure he won the title, but he was beating B level guys like Assuerio Silva, Tra Telligman, and Jeff Monson. He beat Andrei Arlovski twice in a row, but let’s face it – and I love Andrei – a middleweight could knock him out because he gets concussed so easily.

Randy Couture embarrassed him and took away his championship, I was there and it was epic, and shortly after that Tim humped Brandon Vera against the cage to a decision. In that fight Tim was grasping the top of the cage visibly for a lot of the fight almost like he was leaning on it and Vera could not get his clinch game working because of it. After beating Vera, Sylvia dropped 3 straight with two of those being against two of the greatest heavyweights of all time in Minotauro and Fedor. BUT – His next fight was a dreadful black eye to the sport. Just an absolute shameful outing.

On June 13, 2009 Tim “Poopy Pants” Sylvia decided he would take it upon himself to represent the MMA world in a fight against boxing great Ray Mercer. Nine seconds in to that fight it was over. Tim was taking a nap and the MMA world was once again hiding its head momentarily. Check out this video to see Tim get demolished.

As a person Tim was a down to earth guy. He was a little strange, though. I mean the guy wore his championship belt to the grocery store, hunting, clothing shopping, getting gas, and I am not kidding. It meant alot to him, but so did recognition that he never really got. He will always be remembered as a big guy whose size was the reason for his success. 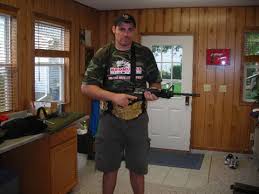 Tim’s PR mouthpiece and MMA promoter Monte Cox had a lot of nice things to say about his client, but hey – what kind of manager would he be if he said anything different?

Monte Cox doing what he does best.

Back in 2001, Tim and I shook hands, agreeing that I would manage his career. Honestly, I didn’t know what to expect… but I knew if determination meant anything, Tim would be successful.

There wasn’t a harder working heavyweight in the world than Tim for the next year. He never missed a practice, he worked on flexibility and skills. His 6-foot-8 frame and length made him a natural striker, but he also worked on his jiu-jitsu and wrestling. He was determined to make it to the top.

A win over an up-and-coming Ben Rothwell at Extreme Challenge 42 made me first realize he was indeed becoming a force. Then, in the “Return of the Heavyweights” Tournament, Tim put together seven wins (six finishes) in a month and 11 days to win the title and make his record a perfect 12-0… That’s when Joe Silva called from the UFC.

We didn’t jump at the UFC chance because I felt Tim was still improving. I wanted him to be his very best when we made the leap to the big-time. Another win made him 13-0 and I couldn’t hold Silva off any longer… we debuted by beating Wes “Cabbage” Correira and Tim’s striking received glowing reviews. A couple months later, Silva called again.

“I know you’re going to think I’m crazy,” Silva started. “But what do you think about Sylvia and Ricco for the title?”

While we were excited about a title fight and the matchup with Ricco, the guy most people feared in the division was Pedro Rizzo, who was KOing everybody. I felt Tim would be able to hold his own striking with Rizzo down the road, but was concerned at the time. I felt if Tim beat Ricco, then Rizzo could certainly be next and that had me worried. Tim, however, already had his mind set… he was fighting Ricco and he was going to win the title.

He was right, knocking out Ricco at 3:09 of the first round. It was the first of nine UFC title fights for Tim, who went 10-4 overall and 5-4 in title fights in the UFC. Remember, this was before the UFC held an event every weekend. Most fights were about six months apart so 14 UFC fights took over five years to complete. His UFC run ended in 2008 when he lost by submission to Antonio Nogueira in a fight Tim was dominating. It was for the interim heavyweight title and Tim would have been the first to win the title three times.

Despite looking good against Nogueira, the UFC had decided not to keep Tim around. He had one fight left on his contract and Silva told me they wouldn’t be renewing the deal.

That’s when I got a great idea. Instead of the UFC paying a lot of money for Tim to fight his last bout on an undercard, why not just agree to let the last fight disappear and let Tim be a free agent. It was a win for both sides and the deal was made.

Shortly after that, the upstart Affliction event was having trouble getting a suitable opponent to face Fedor Emeilianenko, simply the baddest heavyweight on the planet. Tim was excited, and pushed me to negotiate a deal to fight Fedor. I felt like a second straight loss could be hard on our future opportunities, so we had to get a big enough payday to make it worth the risk. Affliction had nowhere else to turn and we agreed on the biggest contract of Tim’s career… almost a guaranteed seven-figure payday.

Fedor caught Tim early and finished him… a familiar scenario for the sport’s best-ever heavyweight.

Now, being a free agent for the first time in six years, Tim also had an interest in boxing. He told me he would like to do both.

Boxing wasn’t going to greet Tim with open arms, but I thought if we could get a win over an older boxing legend, we might be able to get our foot in the door. Ray Mercer was available and we tried to book the fight in New Jersey, but the athletic commission wouldn’t allow it. So, we went to Birmingham, Ala., where the commission was still being formed. We got outside sanctioning for the fight, but the day of the weighin we were told by the ABC that it would not be allowed.

Both fighters said they would do whatever to make the fight happen. In the end, I decided to change it to an MMA contest so neither the commission or ABC would have any jurisdiction. Tim was warned not to take the fight lightly as Mercer was still a dangerous puncher. I don’t think Tim really took the former boxing champ serious as Mercer was out drinking most nights and never seemed to be training. Still, the plan was to take Mercer down and submit him… not overly exciting, but safe. I think Tim was going to follow the game plan, but he started out by throwing a kick and then a big right hand… Tim landed and wobbled Mercer… but Mercer had thrown a right haymaker and it landed on the button. Tim went stiff, and for the first time in his career, he was unconscious before he hit the mat. The fight took nine seconds.

Tim came back to win seven of his next eight fights, but he was having trouble making weight as his body started to fail him. Once the hardest training heavyweight, he now simply couldn’t do the same kind of workouts without his knees or back giving out. He trained the best he could and we started taking bouts overseas… Japan, Philippines, Russia… but at the heavier weight, Tim had slowed down and was no longer able to beat the younger fighters. His fighting spirit remained, and he battled to the end, but it wasn’t the same Tim.

It would be over a year before Tim was close to another fight. A couple other fights were scheduled, but injuries prevented him from competing. This time he stayed healthy training, but couldn’t get the weight off. He weighed in at a career-high 350 pounds for his Mohegan Sun Casino fight (reports were 371, but that was actually his weight when he started training). In the end, it was an MRI that convinced him to call it quits. Because he is now 40, an MRI was required for him to fight and the results showed some damage. The doctor told me the MRI could mean nothing, or could be serious. But they wouldn’t take a chance and let him fight.

Tim agreed it wasn’t worth risking his life to continue fighting and made the right decision. He announced it in the cage where he was supposed to be fighting.

It was the end of a 14-year run as his manager and a career he can look back on and be proud of. He accomplished a lot. He defied the odds and became a two-time UFC champion.

Despite the success and all the ups and downs, Tim remained loyal to me and our handshake agreement. We never had a contract, even when we were working on big-money deals. We didn’t need one. Tim’s handshake means something, his word is his bond. I really respect him for that. Lots of fighters talk about loyalty, but its surprising how many of them change their tunes when money gets involved.

Tim’s fighting career is over, and I no longer manage him, but we will remain close friends. My wife and I are godparents to his son, Maverick, and we have so many great memories of the last 14 years.