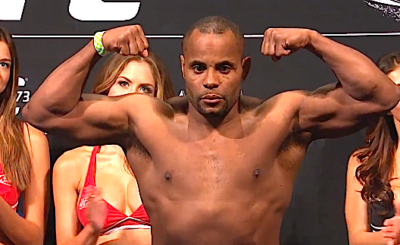 The UFC 182 main event fight between champion Jon Jones and undefeated challenger Daniel Cormier is one of the most anticipated MMA fights in quite some time. There’s good reason, as not only have the two fighters shared physical and verbal assaults leading up to this fight, but the two are unarguably two of the best fighters in the world. There’s no doubt that Jon Jones is already arguably the best MMA fighter ever, but he faces the one fighter that legitimately has a shot at dethroning him on Saturday night.

There’s a reason why Cormier is only a +140 betting underdog, and I believe Cormier will pull off the slight upset on Saturday night.

The length of Jones is probably the biggest factor people point to as to why Jones will be able to beat Cormier. Cormier is extremely short for a light heavyweight, and Jones has unusually long arms (84 inches or so) which makes it a daunting task. However, Cormier has been at a big reach disadvantage in almost all of his fights after fighting larger guys when he was fighting as a heavyweight. He has shown the ability to close the distance against fighters with 81 and 82 inch wingspans with no problem.

The likelihood of Jon Jones knocking Cormier out is small and Jones has never really displayed huge one punch or kicking power, and Cormier has gone up against some heavy hitters in the past with no problem as well.

The likelihood of Jon Jones taking Cormier down and raining down elbows or submitting him is relatively small.  I’m not sure Jones can even take Cormier down, and if he does he probably will not be able to keep him there long enough to inflict much damage. Also, the short, stockiness of Cormier will play to his advantage in defending submissions. He has virtually no neck and his short arms would make it difficult to armbar, etc.

We have seen Jones go all five rounds a couple of times, so we know he can go five rounds in a grueling fight. We’ve seen him fight at a distance against Gustafssson and at close quarters against Texeira, but neither of them have the wrestling prowess or sheer power that Cormier possesses. We even saw Gustafsson take Jones down. Could Jones submit Cormier off his back with his long limbs? Maybe, but not likely.

The one trait that Cormier has combined with the other things I’ve mentioned is the ability to make Jones fight moving backwards. All fighters have problems when being pressured and forced to move backwards unless you’re Chuck Liddell in his prime, but as I mentioned Jones lacks big KO power like Liddell.

Cormier will pressure Jones and either put him against the cage and negate the huge reach advantage, or look to take him down from there. Also, the threat of a takedown may force Jones to take less chances with his patented spinning elbows, etc. Another underrated aspect from Cormier is his ability to put punches together. He puts his punches together really well from close quarters, and transitions into his takedowns very well. It’s doubtful that Jones has ever faced someone as powerful as Cormier, and how will he handle that?

It’s MMA and of course anything can happen, but it appears to me that Cormier has more tools to win this fight. We’ve seen him go five rounds before. We’ve seen him knock heavyweights out with one punch before(granted Jones has shown the ability to take huge shots too).

My only concern is the emotional aspect for Cormier. But, he strikes me as the type of fighter that concentrates at a higher level when more emotionally involved, which admittedly isn’t usually the case. If he’s not able to harness those emotions in a five round fight, it could backfire on him, but I trust that his team has prepared him well for that. I also think his wrestling background and wrestling at the highest level will be a factor from a mental stand point.

It should be a great fight, but don’t be surprised to hear “ANNNNNNNNN NEEEEEEW” from Bruce Buffer tonight.

Here’s to hoping we get to see both fighters coming into this fight relatively healthy, and that they will put on a show for the ages.