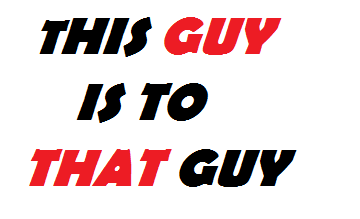 We love comparisons and in this article I look at similar fighters in different divisions. It could be reputations, records, statuses, or anything else that makes them equal in those regards. Here we go!

Gilbert Melendez is to 155 what Rashad Evans is at 205, elite but not the top guy

These two guys account to royal guard members of their weight class more so than gatekeepers. Elite athletes who cannot be #1, but have the ability to beat every other guy in the division. Melendez and Evans are former champions, Gil in Strikeforce and Rashad in the UFC, but have lost those titles and never reclaimed them. They have a solid ground game and a competent striking game. They were both outclassed by division champions. Rashad by Jon Jones and Melendez by Pettis, but they have the luxury of keeping the respect they had going in. Guys like Dan Hardy had some credibility going in to a championship fight, but had less when they came out. This pair is still regarded as the elite in their respective divisions, but no one believes they will ever reclaim gold.

Vitor Belfort is to 205 what Robbie Lawler is to 170, a beautiful comeback story

Both of these fighters have risen from the ashes of failure. After getting knocked out by Nick Diaz when he was younger and reckless, Lawler rebuilt himself in to the champion he is today. The same career transformation was accomplished by Belfort. Vitor’s loss to, I hate to say this, Tito Ortiz along with the obliteration in his rematch with champion Randy Couture before that sparked a downward spiral for the former 205 pound champion that saw him go 2-5. It was that stretch of failure that turned Belfort in to a monster who went 10-2 losing only to the greatest champions of all time in Anderson Silva and  Jon Jones. Think about that for a moment and you will see the incredible comeback story that is ‘The Phenom’. Robbie has beaten Rory MacDonald decisively, Matt Brown, Jake Ellenberger, Josh Koscheck, and is now champion after defeating Johny Hendricks. He is now 6-1 after successfully going back down to welterweight and signing in the UFC. All we need now is Belfort to defeat to Chris Weidman and both stories are complete. Well, not Lawler’s. Robbie needs to knock Diaz out and that would cement him as an all time great and erase a fight fan boys throw out in forum dwelling discussions to this day.

Jim Miller won 7 straight in the UFC – 7 – and he was passed over for a title opportunity. Instead of getting what he deserved he ended up going 9-1 before losing to Benson Henderson. He lost to Nate Diaz two fights later and that was for a chance at the lightweight title. It doesn’t look like he will be fighting for a championship in the near future. He won his next fight, lost to Pat Healy, but that was later overturned to a NC thankfully for Miller, and then won two more before getting smashed badly by Donald Cerrone. Travis Browne shined brightly in his first five fights winning 4 and drawing once with Cheick Kongo. He was on the fast track to a title shot before getting TKO’d by Antonio Silva derailing his momentum and dropping back down in the rankings. Travis then won 3 straight including a win over Josh Barnett, but when it counted he buckled under pressure and lost his chance at a title to Fabricio Werdum. His latest victory was over glass jawed Brendan Schaub and that will do nothing for him in the rankings. Always on the verge, but never a chance at the belt.

Roy Nelson is to 265 what Michael Bisping is to 185, keeper of the keys

Roy Nelson is Hollywood’s Cary Elwes of the UFC. Is he great or isn’t he? Roy has beaten 7 of his 13 opponents, but falters shortly after almost every win. He lost to Junior Dos Santos and then to someone he should not have in Frank Mir. He wins just enough to be relevant, but as a fat guy working man’s fighter he remains a fan favorite. We all know Bisping’s journey. It goes like this 4 wins – lose, 3 wins – lose, and one win – lose, and then 3 wins – lose. It’s a cycle of almost there really and one can’t blame Michael for being frustrated. It is becoming apparent that he is never is going to fight for the championship. He is 3-3 in his last six fights alternating wins and losses and finishing it off with a loss to rival Luke Rockhold. Nelson and Bisping will always be the measuring stick for their divisions. If you can beat them then you are allowed to sit in the division’s top 10.

The pair of former champions will never be given the true credit they deserve because they were champions during transition periods of the UFC. After Rich lost his title to Anderson Silva fanboys called him “protected”, “exposed”, and “overrated” – then he went 5-2. Hardcore haters said, “Still not good enough for us”. He went 3-3 and took some fights on short notice to finish out his lengthy career as THE company man. All of his losses were to top fighters except for the freak one punch KO by Le, and his fight with Henderson is considered one of the biggest robberies in MMA, and dirtiest because of the blatant eye pokes when Dan was in trouble.

BJ Penn will always be a polarizing figure. Criticized heavily for wanting to fight bigger guys by going up to a higher weight class, just like Franklin did. Penn will be remembered as a guy who fought anyone at anytime, anywhere. He is a former champion like Rich, and his list of title defenses is against who was best at the time, and would later be considered weaker defenses than future champions faced. Rich was the same way defeating Nate Quarry and the heavily hyped David Loiseau. Hardcore fans said Loiseau would crush Franklin, but when they were proven wrong they reversed their proclomations and Rich was once again called “protected”. BJ lost to Matt Hughes and people wrote him off as done before he came back and won the lightweight championship. The pair also lost rematches to fighters that were rival champions in their divisions two times. Franklin to Silva and Penn to GSP.

Kenny Florian would have been lightweight champion if it wasn’t for BJ Penn. He would be champion at 145 if it wasn’t for Jose Aldo. Kenny fought at Middleweight, Welterweight, Lightweight and Featherweight making him the only fighter in history to compete in the UFC in 4 different weight classes. His losses were in two championship fights, one championship eliminator, and for the title of Ultimate Fighter of TUF’s season 1. All of his UFC losses were in big, important fights.

Urijah Faber is also on the bad luck side of two UFC divisions. Faber has lost only 4 fights in the UFC and they were all championship bouts. He can beat everyone, but the champion and his time is running out just like Kenny’s did. One more title fight and Faber may have to call it quits if he can’t win. Dana has a habit of telling fighters to switch weight classes, or retire once they have exhausted title opportunities against current champions. Had someone else held the belt in their divisions they would have been wearing gold.

Brandon Vera is to 205/265 what Todd Duffee is to 265, hilariously over freaking hyped

Brandon Vera came in as the UFC’s golden boy. He won his first fight at heavyweight and they were already talking about him clearing out the division at heavyweight and he even called out Chuck Liddell at light heavyweight as if he already did. Brandon Vera may have been more hyped than anyone in UFC history who sucked as bad as he did. He beat 3 guys and a fat, out of shape Frank Mir before losing to Tim Sylvia and Fabricio Werdum. Losing to two UFC heavyweight champions is not that bad of a thing early in your career. It’s when Vera sucked so bad at heavyweight that he had to drop to light heavyweight where everyone thought he would be unstoppable when he debuted and lost to Keith Jardine of all people. He went 6-5, 6-4-1 if you count the NC that was originally a loss to Thiago Silva. The guys he did manage to beat were tomato cans so big if everyone in the world was a spaghetti noodle they could provide enough sauce to cover them all.

Todd Duffee was the next big thing and by big we mean BIG. He is freakishly huge and when he knocked out B level fighter Tim Hague in 7 seconds it was supposed to be the arrival of the new king of the heavyweight division. Then he lost to Mike “backfat” Russow in embarrassing fashion and was promptly cut from the UFC for being a vacuum of suck. His next fight was an embarrassing annihilation by Alistair Overeem in 19 seconds outside of the UFC. Sure, he has won two since coming back, but they were cans themselves in comparison to the rest of the UFC’s heavyweight division.

These two guys were hilariously over hyped.