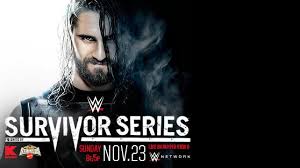 Survivor Series 2014 is in the books and despite some poor booking early on WWE superstars nailed it at the end. It took place on November 23, 2014 at the Scottrade Center in St. Louis, Missouri.

Nikki Bella decimated the greatest female wrestler of this generation to win the Divas championship, and destroyed what credibility AJ Lee had left. I get it, I do. Nikki is who they want to market and they can finally shove Total Divas down our throats 1000% of all Diva screen time blocks.

Fandango returned and I finally got to get up and go to the bathroom. Seriously, only desperate, overweight housewives may enjoy him and yet 18-34 year old males are force fed this junk as if it is good TV.

The Bunny won. Let that sink in. The BUNNY won a match against Slater and Titus O’Neil. WWE creative thinks that a bunny needs to win matches on TV. A stuffed animal comes to life and wrestles on $9.99 worth of special event programming.

The main event of Survivor Series was Team Cena vs. Team Authority and it did not disappoint. The stakes were high in it and the wrestlers put on a show as if their jobs depended on it, and in the story line they did. Dolph Ziggler remains undefeated at Survivor Series with Team Cena’s win last night. This was also Ziggler’s second time becoming sole survivor as the last man when Team Ziggler defeated Team Foley in 2012. Dolph was the elimination machine eliminating almost everyone including Rollins and finally he does to get the win and cement himself as the main event guy. THE guy to carry the world title as long as they don’t book him poorly and once again kill a wrestler’s momentum.

WWE, if you are smart you will start a Ziggler streak here, or at least make it so Dolph is near impossible to defeat around this time every year. Survivor Series really puts a stamp on 2014 and prepares fans for TLC, which tidies up story lines preparing for Wrestlemania pushes.

Now, I have chills when I watch the ending of the main event. Triple H interferes in the match  attempting to secure a victory for Team Authority and then this happens.

The greatest superstar of pro wrestling to never step foot in a WWE ring did and it was magical. Sting makes the save and rolls Ziggler over for the 1-2-3 on Seth Rollins after putting away Triple H with the Scorpion Death Drop. Ziggler gets the pin and will always be associated with the debut of Sting putting another memorable moment in his already full virtual memento box.

Bad News Barrett returned, but his gimmick isn’t as over as it was. At the time he debuted there wasn’t a whole lot going on in WWE much more than The Shield vs. Authority, or Wyatts. They needed someone to come in and be different and Barrett was. Still, he is a great talent who will get over despite his cartoonish booking.

Mizdow is the most over, meaning cheered for, superstar for the most part. His character is fresh, funny, and the fans love it. He serves as a stunt double for “movie star” The Miz and it works. Please WWE more of Mizdow as Mizdow and not some other gimmick.

WWE’s flaw has never been more glaring. Remember when you watched a football game and heard this:

Welcome to the game folks. Earlier this evening on Fox’s  website the coin toss was held. Moments ago on Fox’s app they kicked off and started the game. If you watched ESPN sports center then you know that the reason they are playing is because they won a playoff game. Seattle has Wilson on the bench is due to an injury on Fox’s main sports talk radio program. Now, if you watched Fox’s pre-show then you saw the first touchdown of the evening. Weeks ago they won a game on Fox’s early morning show that put them in the Super Bowl and the back story is complicated so let’s recap during the game until you get it all, just in time for the end of it.

Coach Wilson tweeted that he thought Coach Bobby’s style was atrocious leading to posts on Facebook about style of play. Last week Coach Wilson’s wife tweeted she wasn’t going to make meatloaf for dinner and Fox held a press conference over on our Fox Press show, which is why a meatloaf bet was made over who wins the game. You can get access to all outlets for just $9.99. What a deal I mean come on look at all of the stuff you get. Seattle just scored. I mean $9.99 is incredible for what you get. Raiders get a safety. $9.99 King!!!!”.

When I am watching a match I should know exactly what is going on and the commentators should not have to explain a story line, or most always multiple story lines to us. I should be there to watch a quick video package summarizing the feud leading up to the event, but instead we get the smiling stooges JBL, Michael Cole, and Jerry Lawler rattling on with stupid looks on their faces plugging every show so gratuitously and shamelessly that even my casual fan friends mute the sound.

They just don’t get it when it comes to social media usage and meaningful posting. You can see the marketing team spouting garbage to the board using all of the latest buzz words and convincing them that WWE needs all of this extraneous fringe babble. Let me explain it to those of you who also despise the train wreck style booking. The real reason they do this is so that when WWE pitches deals and courts investors they can list a whole bunch of media presences to get money. PERIOD.

Come on WWE you know how awful this is and how unnecessary all of the marketing ploys are. Let the wrestling shows dictate the drama and stop pretending for image’s sake that anyone is going to all of your media outlets to figure out what is going on and why matches were made for the event.

The one good thing here is that the main event wrestlers can be popular despite WWE’s terrible commentating and shameless promotions. It doesn’t work and your cheesy Thanksgiving Day Parade float commentating, all male The View panel is so bad, and in need of a makeover. Fix it.

So, overall Survivor Series gets a grade of B, but the main event was A+.