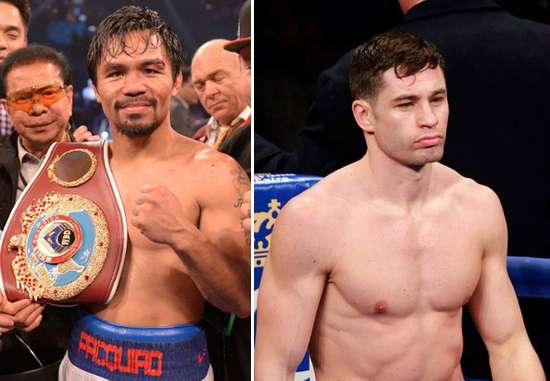 The boxing world will shift it’s focus to Macao Saturday night when multi-divsion champ and superstar Manny Macquiao returns to the ring against an relatively unknown challenger in Chris Algieri. Many have dismissed this as much of a fight including legendary trainer Freddie Roach who says that Algieri won’t last a round.Can he?

Pacquiao was a knockout machine earlier in his career and maybe during that run one would agree with Roach but the power from Manny just hasn’t been there of late. You have to go back to 2009 in a fight against Miguel Cotto to find Pacquiao’s last stoppage. He’s been much more of a grinder since then and that is something that could play into the former kickboxer Algieri’s favor.

It has been a fantastic run since starting his professional boxing career for Chris Algieri. He’s rattled off 20 straight wins. His most significant win to date has been a split decision nod over Ruslan Provodnikov. The win over Provodnikov was big and it earned him the WBO light welterweight title. Algieri isn’t know for his power but for his stamina and he’ll need it to go 12 rounds with one of the best in boxing.

This will be the first time Algieri has fought outside of New York. He’s a long way from home. This will also only be his second 12 round affair. There is a ton of media presence and a whole new set of challenges for Algieri.

Can Algieri shock the world? I don’t think so. I would like to believe it but it’s just not in the cards, at least not this time. Pacquiao has looked solid in his last two outings with dominant performances over Brandon Rios and Timothy Bradley. He’ll be too much for Algieri. I don’t think we’ll see a knockout but it wouldn’t surprise me if Manny won 11 of the 12 rounds.

Stay close to PMN for more on this event that airs Saturday night from The Venetian Macao.