“Cool Hand” Luke Sanders (9-0) won the RFA bantamweight title at RFA 20 in Colorado earlier this month when he stopped Jarred Mercado (12-2) via TKO at 1:06 of the first round. It was his third straight win in RFA and his ninth straight overall.

Sanders remains unbeaten as a professional and six of his nine wins have come by way of knockout.

After sitting ringside for Sanders’ pro debut in Strikeforce back in 2011, and the majority of his fights since then, it’s been a pleasure to watch his development as a fighter. We’ve seen a ton of guys already make the transition from RFA to the UFC, and it seems only a matter of time before Sanders will also need to invoke RFA’s UFC clause. If an upcoming 135-er in the UFC is injured, don’t be surprised to see them come calling.

Here’s our chat with Luke about his development as a fighter, his cross-country traveling to optimize his training, and who he’d most liked to get matched up against when the UFC does reach out.

Cool Hand Luke, what’s up my man? Congratulations on your impressive performance and big win for the RFA bantamweight title. I think I had attended every one of your pro fights prior to you signing with RFA, and couldn’t be happier to see your success as it seems inevitable your next step will be signing with the UFC.

PMN: Can you talk a little about your progression over the last couple of years, especially with your striking. Who has helped you most with that?

CHL: I’ve really been working hard to improve my striking with every camp, since becoming a professional. Now that I’m a little more seasoned a fighter, I’m getting much more confident in letting my hands go and showing what a dynamic striker I can be. Here lately, I’ve been working on my boxing and Thai a little with Chris Beasley out of Bonafyde MMA in Nashville. During camp, though, The MMA Lab’s head striking coach Shihan Nico is the one that puts the finishing touches and precision into play…”shockin and poppin baby”! At the end of the day though, my strong foundation was the work put in by myself and my coach Lance Patrick at NMMA. He deserves a lot of credit. My goal is to be the best and be a well rounded fighter. All these guys are awesome and have really helped develop my standup game and take it to the next level.

PMN: Where do you personally feel you’ve made the biggest improvements?

CHL: I feel like my confidence and conditioning have been the biggest improvement as of late, especially inside the Cage.

PMN: You went pretty far in your career primarily training out of Nashville MMA. How did you come to also start working with Coach Crouch and the guys at The MMA Lab? I know fellow Tennessean Scott Holtzman has also been working with them. What’s the connection there?

CHL: I have been going to Phoenix for years now after one of my best friends moved there to attend ASU. One of my old teammates from Nashville, Ashley Gooch, had also moved to Arizona and was training at The Lab. So during a visit, I decided to go by and see him and check it out. I was technically on vacation, but the chance to train with world class guys was an opportunity I couldn’t pass up. I went and worked out with the guys and absolutely got my butt kicked. I loved it! Coach Crouch then invited me back anytime I wanted. So I decided when the time came, I’d start doing my fight camps there. While I was there I ended up bumping into Scott and we both were like…”wow, small world”!

PMN: What kind of influence has Coach Crouch had on you?

CHL: Coach Crouch is amazing! He is like a professor when it comes to BJJ and technique. I had seriously never experienced anything like it. He is a very intelligent man/coach and is a huge confidence builder. At a time where coaches and gyms are under fire for how they approach training, I can say that Coach Crouch is doing it the right way.

PMN: Okay, the Cool Hand Luke T-Shirt is probably the best fighter T-Shirt I’ve ever seen. Who’s responsible for that design and where can fans pick them up? 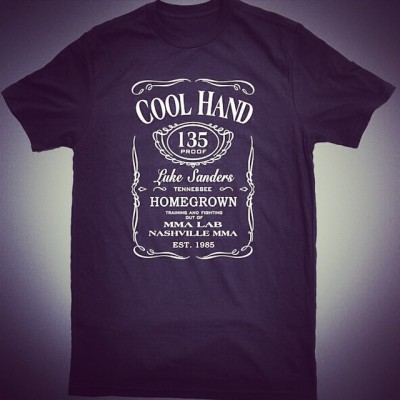 CHL: My manager came up with the concept. I was so busy with preparing for this last fight, that I left the design idea to him. He knows me well and knows that no matter where I travel to, or where I go to train, my love and loyalty is to Tennessee. I am very proud of where I live and I think that shirt screamed “Tennessee”. Nothing says Tennessee like Jack Daniels so the design was perfect. Tennessee homegrown baby!

PMN: Okay… UFC’s Sean Shelby calls you today and says we’re coming to Nashville and you can pick your first opponent. What Is your answer?

CHL: (Laughing) When that happens, Broadway may have to be shut down because of all the people that will be beating on the Bridgestone Arena doors to see me in that cage. My dream match up would be Urijah Faber, but in reality, I don’t care who it is. I just want the opportunity to climb through that door and stand across from whoever.