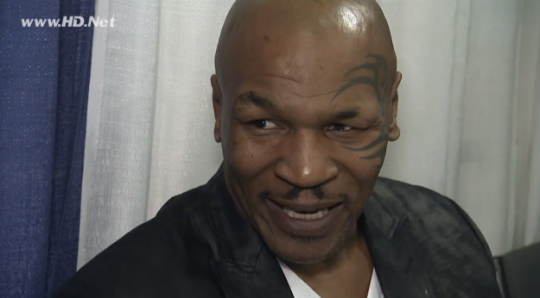 Somehow against all odds Mike Tyson has reinvented himself. The former heavyweight champion and phenomenon of the boxing world famously got knocked out by Buster Douglas in the midst of a media circus relationship with then wife Robin Givens. After losing to Douglas Tyson won eight bouts until ultimately losing to champion Evander Holyfield twice in a row.

In the second Holyfield bout Iron Mike bit off a piece of Evander’s ear and it was all down hill from there. He went 6-0-2 in his next 8 fights, but he was not the feared KO artist anymore and after losing to Lennox Lewis he retired going 1-2 in his next 3 fights.

Throughout his career there have been quite a few crazy moments including a rape conviction, the ear biting incident, and some of the most insane rants ever caught on video.

Since those turbulent years Mike Tyson has become a different man. He has appeared in the comedy smash The Hangover and even in his own one man show directed by Spike Lee. His friendship with UFC president Dana White is well publicized and he has a passion for MMA that has fans asking what would have happened if Mike trained BJJ and took his boxing skills to the Octagon in his prime. It has been a rebirth and fans like me are enjoying seeing a man turn his life around and make a social comeback.

In this video from 2013 Mike Tyson surprises Evander Holyfield at the grocery store on Conan. Once upon a time feared by journalists, Tyson is one of the most sought after guests by talk show hosts. Everyone loves a comeback story.