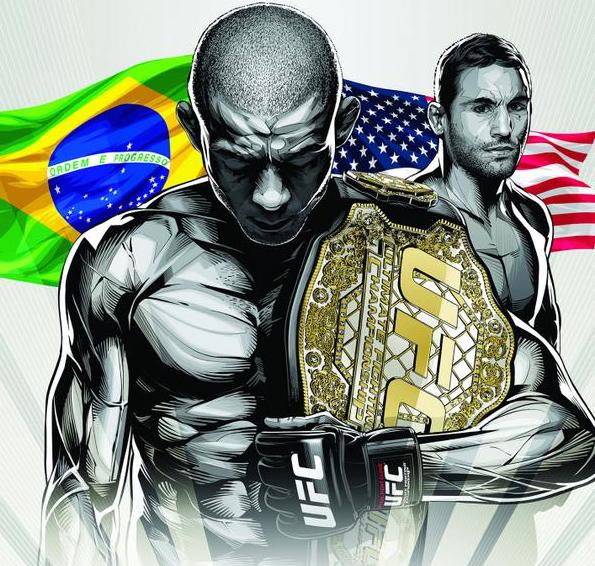 UFC 179 takes place tonight from Rio de Janeiro, Brazil and is headlined with a featherweight title fight as Jose Aldo puts his belt on the line for the seventh time in a rematch with Chad Mendes. In the co-headliner former Penn State All-American Phil Davis clashes with the heavy-handed Glover Teixeira in light heavyweight action.

ProMMAnow.com will have live results and updates of UFC 179 starting at 7 p.m. ET with the prelims, and 10 p.m. ET for the main card.

Round 1 – Martin really cranking on a kimura, staying persistent with it as we near the 1-minute mark. Finally, Camoes taps out. Great showing from Martin.

Round 1 – Burns is able to score a takedown and get full mount, eventually taking Giagos’ back and looking for the choke, he then transitions to an armbar and forces Giagos to tap with just 3 seconds left in the round.

Round 1 – Arantes with a takedown and full mount, lands some elbows that cut Fili. Some good action with both guys landing significant strikes, however, Fili’s takedown at the end may have sealed the round for him.

Round 2 – Arantes with a takedown and full mount early. From full guard Arantes lands several elbows and punches. An illegal upkick from Fili causes a timeout. Back at it and Fili gets the takedown and top position where he works the ground and pound. Ending the round on top again, Fili likely took the round.

Round 3 – Arantes jumps on a guillotine attempt and ends up on bottom with Fili inside full guard. Elbow and pass to side mount from Fili, Arantes is able to gain top control after Fili goes for a submission. Scramble back to the feet, but Arantes is able to score the takedown and land more elbows. Scramble and Fili takes top control before the round ends. He dives in with a couple strike attempts before the bell. PMN scores the round for Arantes 10-9.

Round 1 – Reis appears to go down after an overhand right, but he’s right back up and at it. Reis hurts Jorgensen with a huge body kick, which sets up a takedown by Reis and he pours on the ground and pound, then locks up the head and arm choke and Jorgensen taps out.

Round 1 – Cabral with the takedown and ends the round on top landing some light ground and pound.

Round 2 – Cabral gets another takedown, takes Kotani’s back and sinks in the rear-naked choke.

Round 2 – Macario landing some nice punches, Magny with the occasional counter. Magny gets a takedown with about 1:30 left, and takes full mount. Magny with some solid ground and pound but Macario survives.

Round 3 – Magny with a nice punch combo and Macario goes to the canvas. Magny working the ground and pound again. He takes full mount and continues the assault until the ref stops it.

Round 2 – Big leg kick and takedown from Dariush, looking to take the back. Back to the feet and Dariush gets another takedown, working the ground and pound. Ferreira  looks for an omoplata but Dariush pulls out and goes back to the g n’ p.

Round 3 – Ferreira lands his best punches of the fight. Dariush goes for the takedown but Ferreira rolls it right back to the feet. Dariush shoots again and gets Ferreira on his back. The fight stays there for most of the round where Dariush continues to try and pass, while working some g n’ p. Ferreira gets to a knee with under a minute to go, but is unable to get anything going as Dariush controls him.

Round 1 – Early takedown from Elkins, Martins up pretty quickly. Elkins sets the pace and wins the striking exchanges even though he suffers a cut under his right eye.

Round 3 – Martins makes Elkins pay for a couple takedown attempts with knees to the face. Elkins stays on him though in the clinch, and Martins lands a knee to the upper chest area. Elkins continues with pressure. Ref breaks the stalemate. Elkins goes right back to the clinch against the cage much to the crowd’s disapproval. Ref separates them again. Overhand right from Elkins, seems to have no effect. Everytime Elkins clinches now the crowd boos. And the fight ends still clinched.

Round 1 – Stringer with a takedown out the gate. Fabio tries holding on as Stringer throws elbows from half guard. Stringer gets mount, Maldonado gives up his back, creates a scramble and it’s back to the feet. Stringer scores another takedown and Maldonado’s head is cut. A few body shots from Stringer before the bell.

Round 2 – I just realized all but one of the main card fights have the potential to go to decision. Please let’s hope that doesn’t happen for my sanity’s sake. Stringer clinches up right away against the cage. Maldonado gets some space but eats a few rights from Stringer. Stringer with a few leg kicks and a takedown. Maldonado is able to gain top position and unloads a g n’ p assault as Stirnger does little more than cover up. This fight is over. Maldonado pulls it off in a great comeback. Anderson Silva meets him on the top of the cage and hug it out.

Round 1 – Teixeira stuffs a takedown attempt right off the bat. Davis’ hands are kind of low. He shoots again, stuffed again. Teixeira keeping the pressure on. They trade rights. Phil clinches up briefly. Nice front kick and a right from Phil. He shoots for a single but Teixeira defends very well. Phil stays on him though against the cage. Teixeira tries to wrap up a guillotine but ends up on his back. Immediately gets to his knees and looking to stand but eats a few punches on the way. Phil drags him back down and lands some more shots as Teixeira gets back up. Clinched, Phil still on him against the cage, lands a knee to the body. Phil drags him back down to his knees and is landing a few punches.

Round 2 – Phil mixing up his striking and wrestling nicely and gets Teixeira back down. Teixeira hits a reversal though and it’s back to the feet. Glover tries to jump on another guillotine and he’s back on his back with Phil riding him. Teixeira gets to his knees, then feet. Glover cut near his right eye. Eye poke from Davis forces a timeout. … Body kick and a takedown from Davis before the bell.

Round 3 – Phil gets another takedown after a couple exchanges on the feet. Full mount, Glover gives up his back. Knees to the kidneys from Phil. Teixeira gets to his feet briefly but Phil drags him right back down. Phil riding Glover’s back as he’s on his knees, landing punches and knees to the body. Glover gets back up again. Davis all over him with the clinch and drags Glover back down to his knees where he lands more punches and knees to the body. Absolute domination from Phil Davis.

Round 1 – Mendes takes the center, leg kick. Mendes putting the pressure on, big leg kick. Aldo with a nice punch combo. We got a fight. Both guys throwin heat. A big left hook from Mendes knocks Aldo down. He’s right back up. Leg kick. Leg kick again, inside. Big leg kick from Mendes. Body kick from Aldo. Mendes right in front of Aldo keeping the pressure on. Nice left counter. Nice big one two from Aldo backs Mendes up. Leg kick. Big left hook counter from Mendes. An eye poke from Mendes forces a timeout. Leg kick Mendes but Aldo lands punches. He drops Mendes with a punch and goes for the finish, gets full mount with 20 seconds left. Mendes escapes to his feet. Huge uppercut from Aldo, a left hook and then a left and a right way after the bell knocks Mendes down. Whoa! We got a huge fight here folks. Best fight of the night and best fight we’ve seen in awhile.

Round 3 – Aldo gets poked in the eye again and timeout is called. Nice left from Mendes. Big left hook from Aldo. Aldo throwing heat. Nice jab. Nice uppercut from Mendes hurts Aldo, but Aldo fires back and rocks Mendes. Aldo pours it on with punches and Mendes shoots in for the takedown, but it’s stuffed. Mendes is up and Aldo is all over him. Mendes picks him up and goes for a slam, ties Aldo up in the clinch. Left hook on the break from Mendes.

Round 5 – Mendes strikes first again, landing some nice left hooks. Body kick from Mendes, he then scores a perfectly timed takedown. Aldo gets to his feet and pushes Mendes off. One two from Aldo, then a knee to the body. Mendes goes for a takedown and ends up on his knees with Aldo riding him. Back up to the feet. Nice punch exchange. Left hook to the body and uppercut from Mendes. Aldo lands a right that stumbles Mendes backward. 90 seconds to go. Mendes shoots, stuffed. Right to the body from Aldo. Right from Mendes before the bell. Very very close fight. No idea who won. Aldo climbs onto the cage even before the result is announced.