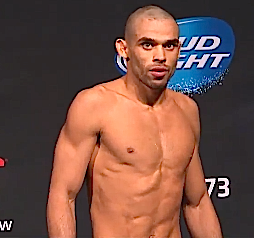 The UFC on FOX official Twitter account made the announcement tonight. Former UFC bantamweight champion Renan Barao will return to action to face Mitch Gagnon in the co-main event of the December 20 event in Sao Paulo, Brazil. The event will air on FOX Sports 1 and will be headlined by a middleweight contender bout between Lyoto Machida and C.B. Dollaway.

Barao (32-2, 1 NC) will be returning to action for the first time since his ill fated attempt to recapture his title against TJ Dillashaw at UFC 177. Barao was set to rematch Dillashaw who had ended in 30+ fight winning streak, but failed to make weight after falling and hitting his head before the bout. It appears that Barao will have to earn his way back up the ladder for another title shot after the UFC had to pull another fighter off the card and replace Barao in the main event.

Gagnon (12-2) has won four consecutive fights and is ranked in the top 20 bantamweights in the world. He hasn’t come close to fighting elite competition though and most will expect Barao to win this fight handily. However, the same was thought when Barao fought Dillashaw the first time and we know what happened there.

Stay tuned to ProMMAnow.com for more UFC news and coverage.