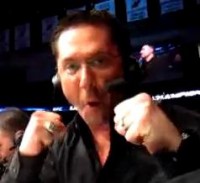 In case you live under a rock Mike Goldberg sucked as an NFL on FOX announcer and was removed from this week’s broadcast. He messed up names, confused offensive team players with defensive, and just generally flubbed his duties. Shortly after the disastrous outing Goldberg let trolls and haters get to him with their comments on Twitter and flipped out. This led FOX to issue a statement distancing themselves from Goldberg and despite reports that his removal from this week’s game is temporary, many believe it is permanent.

You get dozens of chances after mistakes as an athlete, but in the world of easily replaceable commentators if you mess up someone else will jump in to take your place gladly. So, with that being said here are the tweets Mike Goldberg made yesterday to do a little damage control and get potentially back in the good graces of FOX.

I just want to apologize to everyone at FOX and elsewhere for my momentary lapse of reason Sunday night
5:02 PM – 14 Oct 2014

I let some mean-spirited folks on twitter get to me and I should have had thicker skin instead of reacting so quickly and emotionally
5:02 PM – 14 Oct 2014

I don’t want to be a distraction on the upcoming broadcast Sunday, so we mutually agreed that it would be best to sit this next one out
5:03 PM – 14 Oct 2014