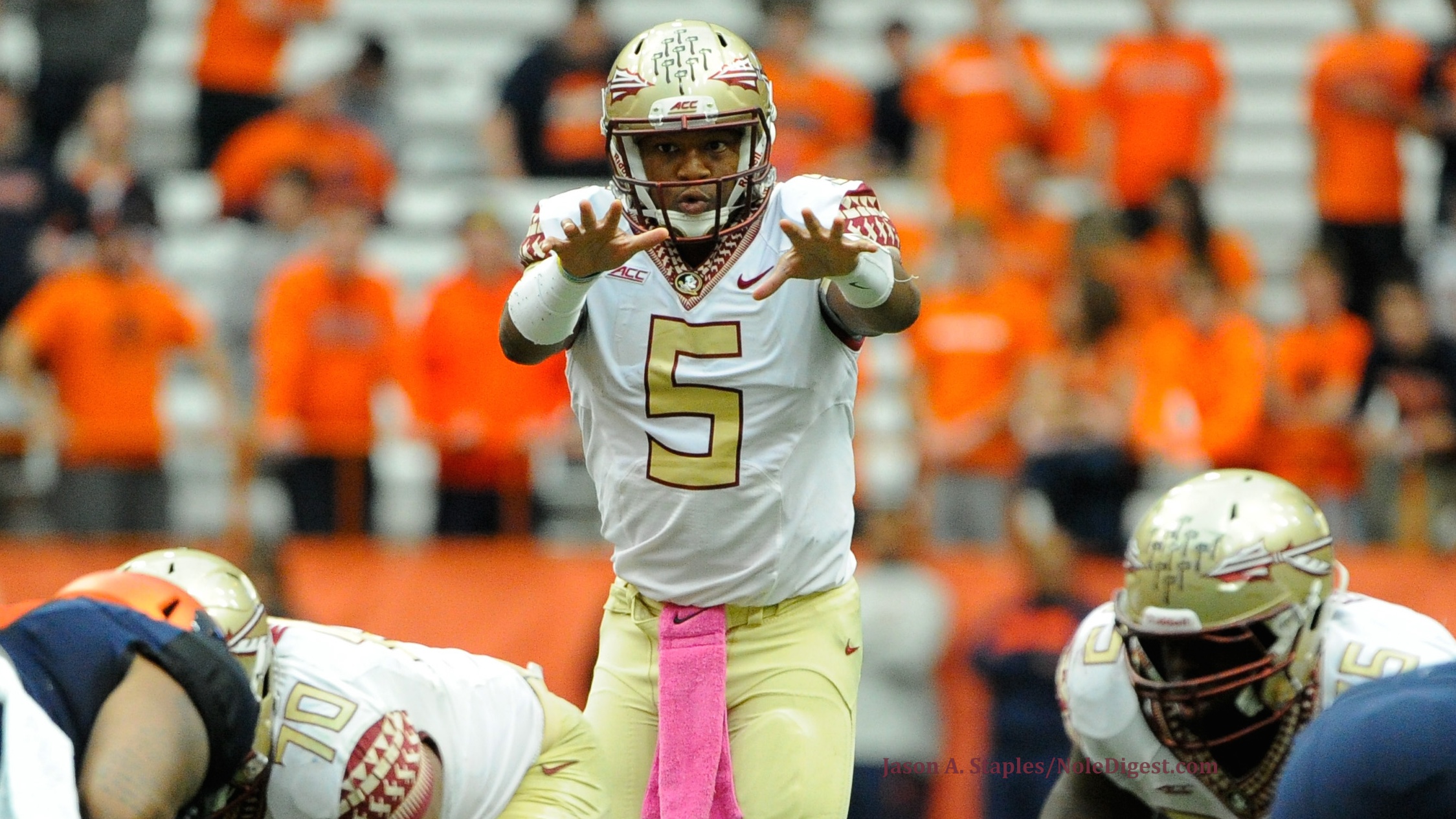 Florida State quarterback Jameis Winston is an elite talent at the college level who projects to do well as a quarterback in the NFL. He won the Heisman Trophy as a redshirt freshman and a national championship. He has the prototypical size and a very good arm. However, what separates him from most other college quarterbacks is his ability to quickly process information on the football field and execute. He has the ability to read defenses at the line of scrimmage and make the appropriate checks and protections while running a pro-style offense at Florida State.

Unfortunately, he has not shown the same smarts off the football field in his decision making which has lead to multiple situations that have not put him in the best light.

Numbers two and three above can be put in the immature 20 year old doing something dumb category and Winston did receive punishment in both situations. Numbers one and four are probably looked at as two major incidents for any college athlete.

Winston was never charged in the assault case because the facts in the case made it difficult for the prosecution to build a strong case against him. However, Winston’s reputation definitely took a hit and he was deemed guilty in the court of public opinion even without charges being brought against him. Jason Staples breaks down the misconceptions:

Why then was Winston not suspended, dismissed, or charged with a crime? Because a close look at the evidence strongly suggests the sexual encounter in question was consensual:

1) Winston’s accuser claims she had been too inebriated or drugged to give consent and the encounter was therefore a sexual assault.

2) The toxicology screen and blood alcohol tests show otherwise, however. The woman’s blood alcohol content was .048 approximately three hours after the incident, “not very high” to quote Florida State Attorney Willie Meggs. That extrapolates to around .1 at the time of the alleged assault, just above the .08 Florida legal limit for impaired driving. The toxicology screen came back clean.

3) The woman’s friends testified that she was not overly intoxicated or otherwise affected when she left the bar with Winston and his friends.

4) Eyewitnesses Chris Casher and Ronald Darby testified that she was not impaired.

5) Casher and Darby also testify to having observed the woman performing oral sex on Winston and that she was on top during the sexual encounter.

6) Casher was placed on FSU probation for—by his own admission—videorecording part of the encounter, though the video was erased shortly afterwards.

7) The woman also initially lied about the source of a second semen sample found on her shorts, claiming she had borrowed the shorts from her roommate. The sample was in fact traced to the woman’s boyfriend, a football player at a MAC school in the state of Ohio. (Minor misconception: this second semen sample was not from the same day as many have suggested; it was rather from an encounter on an earlier date.)

The case essentially boiled down to the woman’s word versus the toxicology/blood alcohol results, the word of her friends, and eyewitnesses. That’s why Winston was never charged or suspended.

For a variety of reasons, these details of the case have not been widely reported in the national media, however, leading to a widespread impression among the public that Winston got away with sexual assault. The resulting outrage has led to calls for draconian punishments for any other perceived misdeed as a way to atone for this perceived injustice. This is not the first time that has happened. As FSU head coach Jimbo Fisher observed on Monday, the Duke Lacrosse case was accompanied by similar outrage and calls for judgment, only to be proven false many months later.

Yet, news outlets like ESPN will not report any of those items simply because Winston makes them plenty of money.  They will push their own narrative to create headlines or write misleading headlines to get people to click on their half-truth stories to push their agenda to make money.

What about the autographs issue? I’m glad you asked as Staples addresses those misconceptions as well:

Last year, JSA authenticated similar series of items from Jadeveon Clowney,Braxton Miller, Sammy Watkins, and Johnny Manziel, among others. Only Manziel was implicated for selling his autographs after photos emerged of Manziel at an offseason signing session.

The sequential numbers do not mean all the items involved were signed at exactly the same time, either, as items are serialized after they are authenticated. Someone could, for example, get Winston to sign items on five different occasions, submit the items as they receive them, and then receive them all back at once with consecutive serial numbers.

Winston has been tireless when it comes to signing autographs, as these photographs from the ACC Baseball Tournament suggest. Winston’s autograph line extended into the walkway above the first section, with many fans bringing multiple items to be signed.

This does not mean Winston did not get paid for his autograph. But without evidence beyond the circumstantial sequential authentications (video, cancelled checks, photo evidence, etc.) there’s no way to prove it.

Therein lies why you love to hate Jameis Winston. It just feels as though you believe he had to have assaulted that female just because she or her lawyers said so right? He had to have signed all those items and gotten paid to do it right? Yet, all the facts and evidence thus far say otherwise. He shouldn’t have won the Heisman Trophy although no charges were filed and he was clearly the best college player on the planet last year.  FSU shouldn’t have beaten Clemson with it’s backup quarterback Sean Maguire even though Winston sat with him for hours after practice was over going over plays preparing him for the biggest moment of his career. Maybe it’s because you despise how his teammates respond to Winston’s ability to lead them to 22 straight wins? Maybe it’s because no matter how the media(granted some stuff was warranted because of Winston’s decision making) tries to paint Winston, he responds on the field and his play is almost always good to elite?

Maybe it’s as simple as you’re tired of seeing someone win so much that you root for them to lose?

Please tell me.  Why do you continue to love to hate Jameis Winston?

6 thoughts on “Jameis Winston: The Guy You Love To Hate”