WWE: More inside info on Justin Roberts being released, replacements 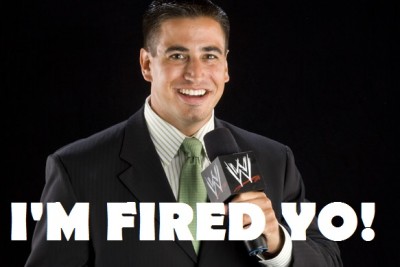 It’s no secret that Michael Cole is known to be a pretentious pain in the ass so it’s not shocking when we get reports from sources about his actions representing that fact.

We reported earlier that long time WWE announcer Justin Roberts was fired, let go according to WWE when they decided not to renew his contract. During RAW in Atlanta last night fans took to social media to discuss the very unprofessional conduct of Michael Cole and Justin Roberts. The pair were seen screaming at each other during the entertaining Dolph Ziggler vs. Randy Orton match featured on the show. At one point Roberts apparently flipped off Cole and his fellow commentators apparently backed Cole up.

A fan sent this in:

Roberts heard Michael Cole being snarky and turned around. Roberts said something back and then they started yelling. Cole started yelling back and some guys at ringside tried to quiet them down. They shut up and when Cole tried to get the last word in as Roberts was walking away Justin flipped him off. There were some kids at ringside very confused and parents were trying to distract them so they couldn’t hear the two guys fighting

In the meantime it looks like Lillian Garcia is back in as an announcer and will be joined by Eden in shared duties. A man named Byron Saxton is also being tossed around as a replacement, but the only thing for certain is that Roberts is gone. PMN will continue to update you on this story because we believe there is more to come out of the Roberts, Cole yelling match.