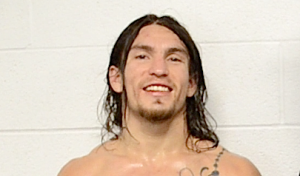 LAS VEGAS, Nevada – Resurrection Fighting Alliance (RFA) president Ed Soares announced today that the promotion will be bringing a world class bantamweight world title fight to Colorado in November. RFA 20 – Mercado vs. Sanders will feature a main event between two of the world’s top bantamweight prospects as local favorite Jarred “Shutout” Mercado and undefeated “Cool Hand” Luke Sanders battle for the vacant RFA bantamweight title. In the co-main event, a pair of exciting RFA vets face off as Josh Cavan and Benjamin Smith meet in an explosive welterweight contest. The event takes place Friday, November 7th at the 1STBANK Center in Broomfield, Colorado, which is located just outside of Denver, Colorado. The entire main card will be televised live and nationwide on AXS TV at 10 p.m. ET / 7 p.m. PT.

“Jarred Mercado and Luke Sanders are pound-for-pound two of the toughest fighters in the world,” stated Soares. “On Friday, November 7th at RFA 20, Colorado fight fans will witness the crowning of our next great bantamweight champion.”

Tickets for RFA 20 – Mercado vs. Sanders are available for purchase starting Monday, October 13th at 10:00 am (MST) through AltitudeTickets.com. Tickets start at just $25.00. A limited number of catered 8-seat cageside VIP tables are available by calling 303-521-0966. 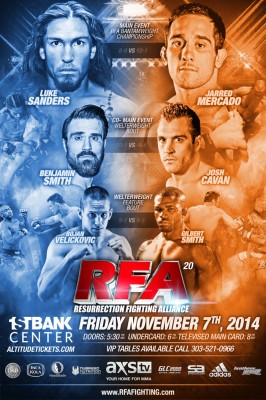 Mercado (12-1) possesses one of the most brutally effective styles of fighting in all of MMA. This comes from his well documented wrestling pedigree. After compiling a 106-18 record in high school wrestling, Mercado attended Northwestern University and wrestled in the Big Ten Conference. Mercado faced some of the top NCAA Division I competition in the country as a Wildcat and continued displaying his athletic prowess inside the cage upon graduation. Now widely-regarded one of the top bantamweight MMA prospects in the country, Mercado will face Sanders for the RFA title in what is shaping up to be a collision course between two of the world’s most daunting bantamweight forces.

“I’m really excited about this fight since there is so much on the line,” stated Mercado. “Winning the RFA bantamweight title will be huge for my career. Luke Sanders is obviously a very tough opponent, but it doesn’t matter who steps across from me in the cage. I know I have what it takes to be the best in this sport.”

Sanders (8-0) has quickly endeared himself to the RFA faithful during his first year with the promotion. In March, Sanders faced Dan Moret in his RFA debut, who shared an identical flawless record at 6-0. Sanders showed an indomitable spirit in that fight by staging a ferocious comeback in the last two rounds to get his hand raised. After the fight, Sanders dropped down to his natural weight class of 135-pounds, even though his undefeated record was still intact. The division change paid immediate dividends as he defeated Darrick Minner via TKO in August to earn a shot at his first world title. Needless to say, Sanders is eager to cement his status as one of the world’s premier bantamweights.

“Everybody needs to make sure to watch this title fight on November 7th,” said an excited Sanders. “I guarantee to be 100% and I’m coming for the gold at RFA 20!”

The co-main event of RFA 20 will feature a pair of exciting RFA vets in what could be billed as a battle of super heroes. Local favorite Josh “Superman” Cavan (9-4) will look to entertain his hometown crowd once again as he squares off with the surging Minnesota native Benjamin Smith (10-2) whose fans are easily spotted at his fights sporting his signature “Batman” themed t-shirts. While the ageless debate of who wins a fight between Superman vs. Batman may never be answered, the winner of Cavan and Smith at RFA 20 will surely see their MMA career catapulted to new heights.

“I’m just really excited about getting back in the cage to fight for such a great organization,” Cavan explained. “I’m more focused than ever. This will be an exciting fight for the fans between two hungry RFA vets.”

Smith shares similar sentiments on returning to the RFA cage after winning four straight fights and two regional titles since his last appearance inside the RFA octagon.

“It’s great to be back on the RFA stage. The first time didn’t go my way, but I’m looking forward to showing the RFA fans what I can do,” stated Smith. “Josh Cavan looks like a very formidable opponent and we have similar styles, so it will be interesting to see who comes out on top at RFA 20.”

The featured fight at RFA 20 will also feature a pair of highly-touted welterweights in what is sure to be a crowd pleasing affair as Serbian sensation Bojan Velickovic (9-2) faces UFC vet and TUF 17 contestant Gilbert Smith (9-3). Velickovic returns to the state of Colorado to compete in the same venue he made a name for himself at Ring of Fire 41 three years ago. He won his fight that night with a scintillating TKO in just 99 seconds. He got his opportunity to fight that night by winning the Ring of Fire – Europe tournament 12 months earlier.

Velickovic will return to Colorado to face Smith, who is a Colorado Springs native and U.S. Army veteran. Smith burst onto the MMA scene on to the MMA scene last year, as a member of Team Jones on the UFC’s seventeenth season of The Ultimate Fighter. Smith competed for the UFC as a middleweight and will now look to show the world what he can do at welterweight, as he gets ready to make his RFA debut in front of his family and friends in his home state of Colorado.

The entire main card of RFA 20 – Mercado vs. Sanders will be televised live on AXS TV starting at 10:00 p.m. ET / 7:00 p.m. PT on Friday, November 7th. RFA 20 will be the promotion’s fourth event to take place in the state of Colorado and it will be the second time the RFA has visited the state in 2014. More fights on the stacked RFA 20 fight card will be announced soon.